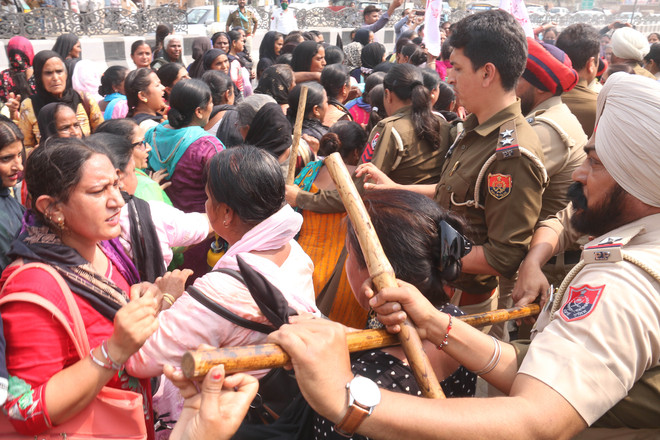 The Bathinda police today had a tough time in controlling Anganwari workers, who reached outside Finance Minister Manpreet Singh Badal’s office to stage a protest in Bathinda on Tuesday.

The situation turned tense as protesters reached outside the Manpreet’s office at a time when a langar was organized by him in remembrance of his mother. The police had to use mild force to control the protesters who were raising slogans.

abohar: Members of the All Punjab Anganwari Mulazim Union, led by block president Gurwant Kaur, burnt copies of the state Budget and raised slogans against the state government on Tuesday. They were protesting against non-hike in their honorarium. — OC.

Led by Anganwadi workers state president Hargobind Kaur, the protesters were disappointed with the Budget presented by Manpreet yesterday. They today reached the Finance Minister’s office to gehrao it. As they tried to burn his effigy Congress workers stopped them.

Anganwari workers accused policemen of molestation and claimed there was no policewoman police at the spot. They also announced to gehrao the SSP’s office tomorrow.

Earlier in the morning, Anganwadi workers gathered at Ambedkar Park and started a march towards Manpreet’s office. However, they were stopped by the police at some distance from the office. An argument ensued between them and workers broke through the barrier.

Hargobind Kaur said workers had been voicing their demands and issues for a long time, but the government was ignoring them. He said nothing was given to the employees even in the Budget and there was anger in them.