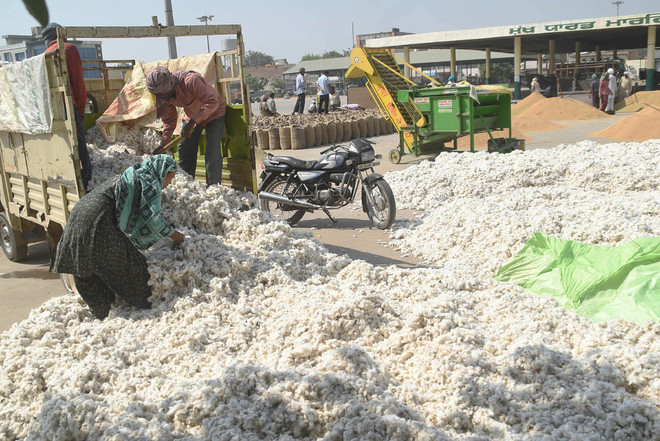 Labourers unload cotton from a vehicle at a grain market in Bathinda. Photo: Pawan Sharma

Even as cotton has started fetching as high as Rs 8,300 per quintal this season against the MSP of Rs 5,925, its arrival in the mandis across the state is delayed.

The data gathered by The Tribune from the Cotton Corporation of India (CCI) revealed that so far (till October 20) only 3.75 lakh quintal of cotton has been purchased at mandis against 7 lakh quintal purchased during the previous season around the same period. Experts have attributed the decline in arrival to farmers’ anticipation of further upward movement in prices of cotton in the market. They also blamed pink bollworm attack for the late arrival of the crop.

A senior functionary of the CCI said: “Farmers are testing the waters before they can take the plunge. Like industry experts, they also study market trends and based on calculations and years of experience, make smart choices. Despite being well aware that they can fetch lucrative prices now, they are holding back the produce and bringing only smaller quantities to mandis. They are certainly anticipating a further hike in prices and if that happens, they will start bringing the produce in bulk.”

He said after the demand for cotton increased in the international market, its price soared and private players started buying it on rates way above the MSP. “With prevailing market dynamics expected to persist in the coming months, it’s the cotton growers who are expected to reap rich dividends this season,” he added.

After making a record purchase of 50 per cent of the total cotton produced in the state during previous procurement season, the CCI did not even enter the market this year as private players were already buying cotton at prices way above the MSP.

Modan Singh, a buyer from Bathinda-based private cotton mill, said: “Last season, more than 1,000-1,500 quintals was sold daily at mandis in Bathinda and now the arrival has come down to 250-400 quintals. Even though quality of cotton is not that good as compared to the last season, still we are compelled to buy it at higher rates.”

He said as there was pink bollworm attack on the crop in Malwa region this time, there was a sense of uncertainty whether they would be able to buy the required quantity of cotton this season or not. “But unfortunately, farmers are brining less and low quality of cotton to markets these days. Labour shortage is another factor that is on the minds of buyers as they would remain engaged in paddy harvesting in the coming days,” he said.