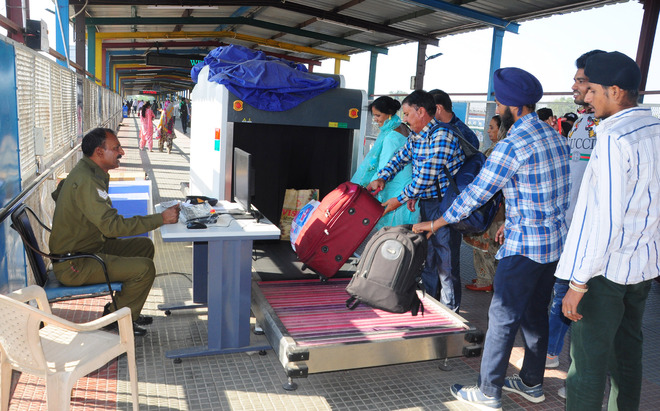 Passengers place their luggage on a baggage scanner machine at the Bathinda railway station. Vijay Kumar

In its bid to step up vigil and enhance security arrangements, the Railway Protection Force (RPF), Bathinda, has established a sophisticated baggage scanner machine (BSM) at the entrance of the city railway station. RPF officials said given the rising number of passengers at the railway station, the need was increasingly felt to intensify vigil and introduction of BSM was a step in the direction. They said earlier passenger footfall at the station was low.

An RPF official can be seen sitting next to the baggage scanning machine, asking passengers carrying luggage to place them on the machine for examination. But with no checking arrangements at the exit points, passengers can be seen entering the station with their baggage not being checked.

Sources in the RPF said introducing the baggage scanner machine at the station was a laudable step taken by the railway authorities, but it would serve its purpose partially. Since there is no scanner machine installed at the exit points from where several passengers enter the railway station and there is no one manning (RPF and GRP personnel hardly seen there) these points, there are possibilities of transportation of illegal substance/material by passengers. Therefore, introducing the BSM at the entry point itself would be merely a cosmetic solution to poor security arrangements at the station.

Inspector Vijayinder Chaudhary, in-charge, RPF, Bathinda, said, “The Railways has started this project to intensify security arrangements at the railway stations across the country. It is set up on an experimental basis and we would see the response. If it serves its purpose well, another machine will be installed at the exit points as well and we will also ensure that we plug all those points where passengers enter and exit the station, but it would be done in a step-by-step manner.”