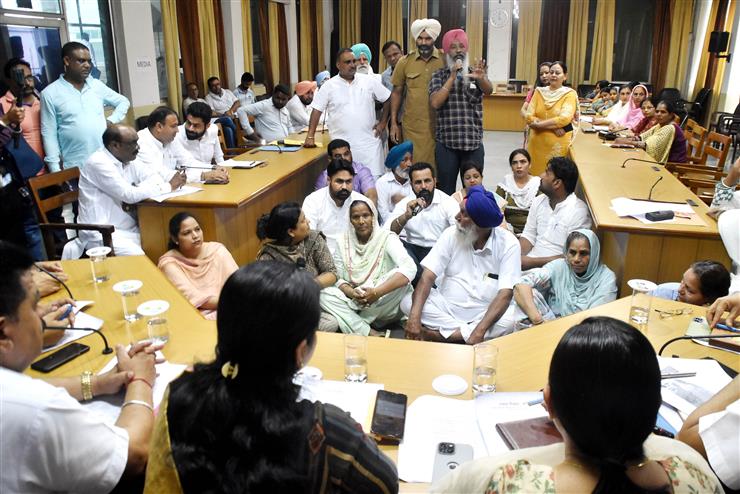 A section of the Congress councillors protests during the Bathinda MC meet. Photo: Pawan Sharma

A section of Congress councillors today opened a front against their own party Mayor, Raman Goyal, and staged a dharna during a General House meeting at the local Municipal Corporation office.

Moreover, the ruling Congress councillors were clearly seen divided into two groups at the meeting. Shiromani Akali Dal (SAD) councillors also joined and staged a protest during the meeting.

Congress councillors Balraj Pakka and Malkit Singh said the sewerage was in a bad condition and no prior plan had been prepared to drain out rainwater.

They further alleged that the Mayor does not listen to the councillors in the Municipal Corporation office,

nor was she interested in getting their work done. In this situation, development works in various wards

Notably, the General House meeting of the Bathinda Municipal Corporation was earlier scheduled on June 29. However, just a few hours before the meeting, the Mayor cancelled it. Irked, more than a dozen Congress councillors submitted a demand letter to the Municipal

Corporation Commissioner, requesting her to convene a General House meeting.

Seeing Congress councillors taking on their own Mayor, those from the SAD remained mute spectators in the meeting today. SAD councillors said for the past two years, they were saying that no development work taken up in the city and now those from the Congress were raising the same issue.

With this development, it is evident that the Congress is facing an uphill task to keep its flock together in Bathinda. However, there is no immediate threat to the Mayor’s chair as Goyal still has the majority on her side.

Meanwhile, amid the protest, various agendas listed for the Municipal Corporation House meeting were discussed and all proposals, except three, were passed.