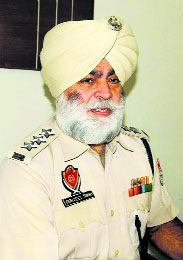 A police officer, DSP Bathinda City 1 Gurjit Singh Romana, has been given a year-long extension in service by the government in contravention of the state policy implemented last year against the practice.

While other officials have been denied extension owing to the new rule, it is surprising one has been given extension, ignoring this norm. — Govt Employees Union office-bearer

DSP Romana was set to retire on July 31, but the Home Department issued a notification on July 26, extending his tenure till July 31, 2022. Romana has remained the blue-eyed official during both Congress and SAD-BJP regimes.

In 2017, a departmental inquiry was ordered against him after a case was registered at the Nehianwala police station on April 10, 2017, against Gobind Gupta of Goniana Mandi. Gupta was arrested with an illegal stock of 1,500 habit-forming tablets. He was, however, released within 10 days after an inquiry by DSP Romana gave him a clean chit.

When the matter came to the notice of then Bathinda IG MS Chhina, he marked an inquiry to then Faridkot SSP Dr Nanak Singh. Romana was indicted in the probe report as allegations against him were found true, but no action was taken after the internal report concluded that Gupta’s release was a “mistake, not a deliberate attempt”.

However, after the indictment, he was transferred to 6th IRB, Ladda Kothi, Sangrur, and later returned to Bathinda as DSP. Since then, he has been deputed here. AAP state spokesman Neel Garg said: “This government does not care about rules. This is wrong that going against its own policy, extension has been given to a government employee.” — TNS