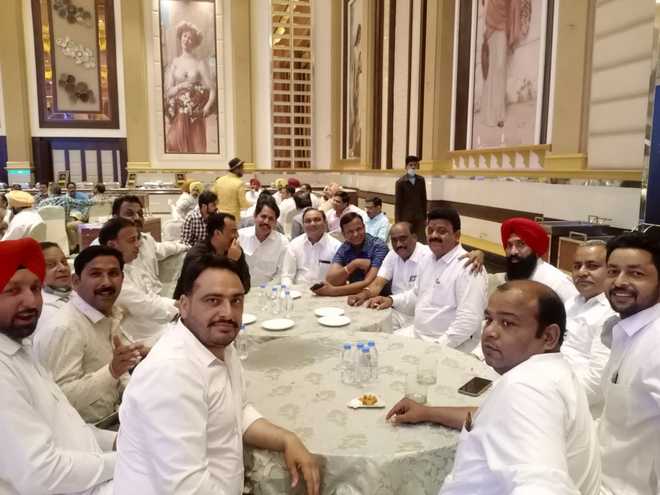 Congress leaders during a party at a Bathinda resort. File photo

The police today arrested Bathinda Mayor Raman Goyal’s husband Sandeep Goyal along with 11 others, including two Congress municipal councillors, five husbands of Congress councillors and five other party leaders, who attended a councillors’ party at Three Palms Resorts here on Friday night in violation of the Covid norms.

We have identified and arrested 12 persons Tuesday. They were released on bail later. Further investigation is on. More will be arrested soon. — Amrit Kaur Gill, DC

The Congress leaders had organised a function at the resort, located on the Goniana road on city outskirts, in violation of the Covid-19 norms. It is learnt the party was thrown by the Mayor’s husband, a liquor contractor and aide of Finance Minister Manpreet Badal, to celebrate his wife’s installation as the Mayor.

Efforts were made to hush up the matter, but for some photographs of the event that surfaced on the social media and media. In one such photograph, Senior Deputy Mayor Ashok Pradhan was seen dining with Congress councillors and other leaders.

The Bathinda police registered an FIR and arrested resort owner Rajiv Kumar after sealing the resort on Sunday and more arrests were made in the case today.