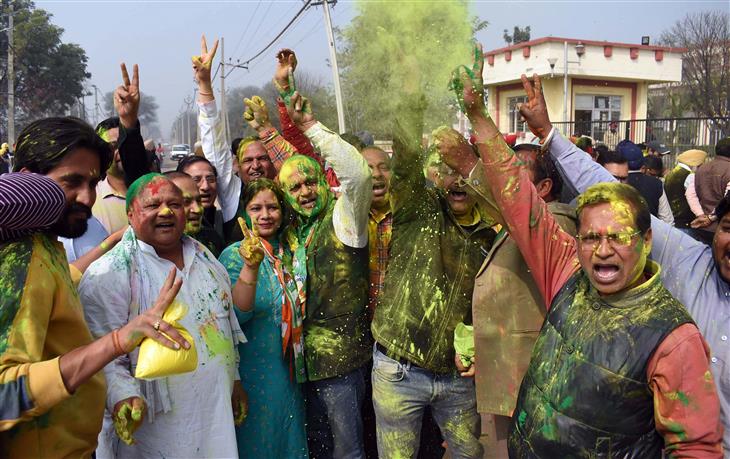 Supporters of Cong candidate celebrate victory and playing holi outside the counting centre in Bathinda on Wednesday. Tribune file photo

The farmers’ issue and the resultant rift with the Bharatiya Janata Party seem to have cost Akalis the civic body elections in Bathinda.

The Akalis, who won Bathinda in the Lok Sabha elections in 2019, appeared to have ceded ground yet again to Congress, which came back strong in the civic body elections after it lost the seat in 2019 in a closely contested race in the general election.

Aam Aadmi Party, which is the principal opposition party in the state legislature after the 2017 elections, appeared to have made some gains these elections, although it still remained a distant third.

These civic body elections also saw Congress and SAD in a direct contest in most wards. AAP gave a tough fight in eight wards—2, 15, 16, 24, 32, 33, 38, and 40—and came second there. Among AAP’s candidates lost in a close battle was Mandeep Kaur Ramgarhia from Ward 33, who lost with the lowest margin.

Four wards—12, 21, 29, and 42—saw independents giving a tough fight to the winning candidates.

Political experts claim SAD’s perceived dithering in taken a stand over the farmers’ issue may have cost them the elections. Another reason could be SAD’s parting of ways with the BJP over the issue, causing a fall in their votes.