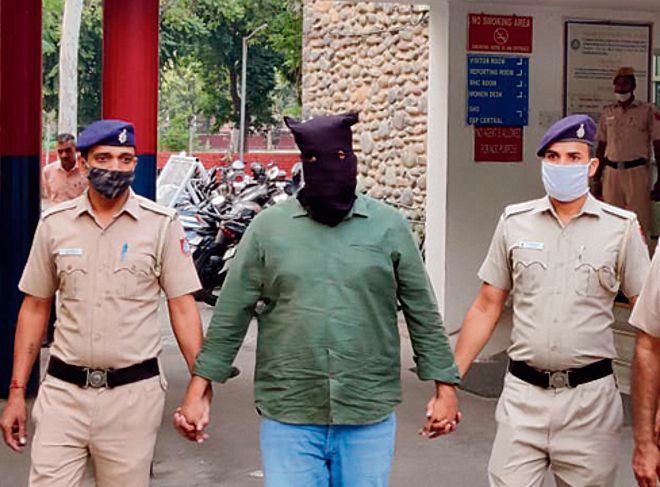 Five persons, including the Bathinda district Youth Congress president, were nabbed by the Chandigarh Police while illegally possessing pistols and cartridges at nakas laid by the police on the intervening night of October 31 and November 1.

The miscreants, riding a Swift, tried to escape from the spot. However, the suspects were chased and nabbed near the Sector 7/8/18/19 roundabout.

DSP (Central) Krishan Kumar said the nakas were laid in the wake of recent firing incidents reported from the city. The police had laid a naka on the road opposite the TDI mall in Sector 17 when a Scorpio was stopped for checking around 11.30 pm.

The SUV was being driven by 31-year-old Lakhwinder Singh, a resident of Bathinda. The police said during checking, a pistol and seven live cartridges were recovered from his possession.

Lakhwinder is the Bathinda district Youth Congress president. On a complaint of ASI Tejinder Singh, a case was registered against Lakhwinder at the Sector 17 police station.

In another incident at the same naka, the police signalled a Swift car to stop. However, the person driving the car sped away from the spot. A police party chased the car following which the suspects were intercepted by a team, led by Inspector Ram Rattan, SHO of the Sector 17 police station, at the Sector 7/8/18/19 roundabout. During a search of the car, a country-made revolver and five live cartridges were recovered from 45-year-old Amritpal Singh, a resident of Bathinda, and seven live cartridges were recovered from Harpreet Singh (29), a resident of Mansa district.

Both suspects are “farmers”. A case has been registered against them at the Sector 17 police station. All suspects were produced in a court today, which remanded Lakhwinder in one-day police custody and Amritpal and Harpreet in two-day police custody.

Two suspects were also nabbed at a naka on the road separating Sector 8 and 18.

The police said a Ford Endeavour (PB 31 V0011) was stopped at the naka followng which a person sitting next to the driver’s seat tried to escape. However, he was nabbed at the spot.

A case against the suspects has been registered at the Sector 3 police station.

Following shooting incidents in the city, the UT police have started laying special nakas during weekends to check the movement of suspicious people in the city. Three persons were nabbed with weapons during a similar naka last week on the road separating Sector 8 and 18.