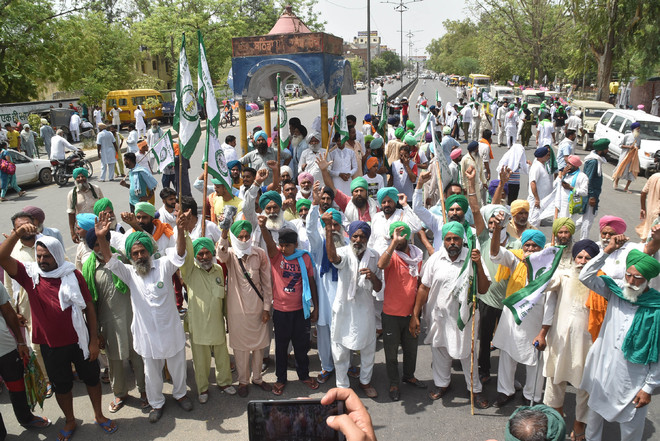 Farmers owing allegiance to BKU (Sidhupur) raise slogans against the government on the GT road in Bathinda. photo: Pawan Sharma

Farmers under the banner of the Bhartiya Kisan Union (BKU), Sidhupur, today staged a protest by blocking the main GT road outside the Deputy Commissioner’s office in Bathinda.

The protest was headed by BKU (Sidhupur) state general secretary Kaka Singh Kotra. The protesters raised slogans against the Punjab Government. Baldev Singh Sandoha and Resham Singh Yatri said during a protest at Jaito against cases registered against farmers who burnt stubble, farmer Jagsir Singh of Kotra Kaura village in Bathinda died by suicide. At that time, the government promised compensation, loan waiver and a government job to a family member of Jagsir, but to date, the job has not been given despite assurances from the administration. The commuters remained at the receiving end as farmers blocked the main road. — TNS