Advocacy of these laws by IMF was a clear proof that along with big corporates, these laws had the backing of imperialistic institutions, says Joginder Singh Ugrahan 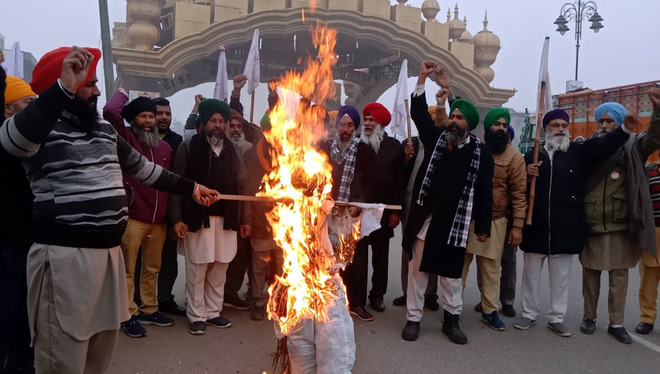 Amritsar farmers burn an effigy of the IMF. - File

Reacting sharply to the statement of the International Monetary Fund (IMF) defending the central farm laws, the Bhartiya Kisan Union (Ekta Ugrahan) has decided to burn its effigies at the Delhi Morcha and in Punjab on January 19.

Farm laws are the result of the imperialistic policies of institutions like the IMF… India should leave such institutions and form policies in accordance with the needs of its own people.

BKU (Ekta Ugrahan) president Joginder Singh Ugrahan said the IMF’s statement was pat on the central government’s back over its obdurate refusal not to repeal the ‘anti-farmer’ laws. Such international financial institutions will also face the ire of the farmers. The advocacy of these laws by the IMF was a clear proof that along with big corporates, these laws had the backing of the imperialistic institutions, he said.

Union state secretary Shingara Singh Mann said the imperialistic policies of these institutions in the third world countries in the name of globalisation lie behind the enactment of these laws. The connection of anti-farmer laws with the Bali conference held in 2013 had become crystal clear, he said.

Both leaders claimed that it was a matter of utmost importance to remember that in this conference, the Government of India was directed to wind up the entire structure of the procurement of foodgrain by the government and also to open the grain markets for the multinational corporate houses.

Further, they said, in compliance with these directions, the Modi government constituted the Shanta Kumar committee which, in turn, recommended the winding up of FCI. The Modi government had simply put these recommendations into practice by enacting these laws.

They also said in order to expose the hand of imperialism behind these laws, the financial institutions’ effigies will be burnt at the Delhi Morcha and throughout the state.