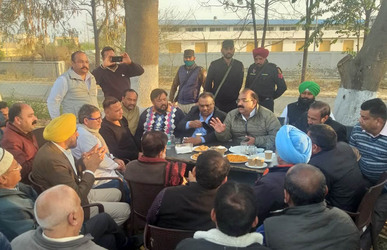 Ashwani Sharma holds a party meeting at an undisclosed location on the outskirts of Bathinda. Tribune photo

Facing protests from farmers, state BJP chief Ashwani Sharma did not turn up at the decided venue and instead held meeting with party leaders at an undisclosed location in Bathinda on Tuesday.

Sharma alleged the Congress government had murdered democracy as all officials were behaving like the puppets of CM Capt Amarinder Singh.

He said this was the first election, in which candidates of a national party were not being allowed to campaign or hold meetings, and even their posters were being torn.

Sharma said he along with other leaders would meet the Governor and the DGP over the safety of BJP candidates in the MC polls. As the farmers got information about Sharma’s arrival in the city, they reached the venue and protested.

Even policemen in large numbers were deployed and all roads leading to the venue near the multipurpose sports stadium were cordoned off. IGP, Bathinda Range, Jaskaran Singh and SSP Bhupinderjeet Singh Virk also reached the spot and pacified the protesters. — TNS