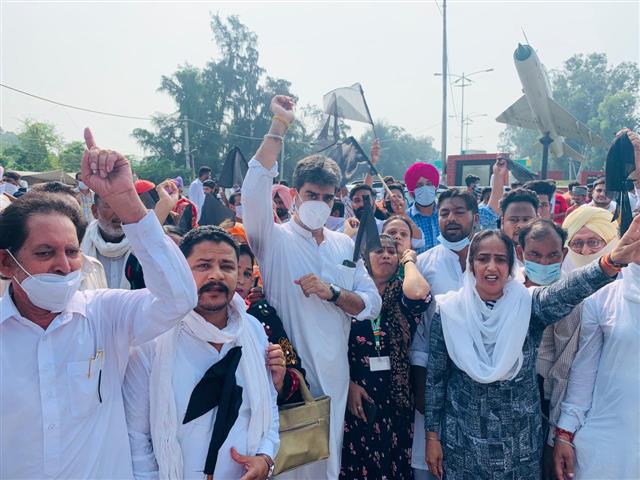 Staging protest, Congress leaders alleged that the SAD was playing dual politics over the farmers' issue as it was protesting against the farm-related bills and even standing in its favour at the same time.

Jaijeet Singh Johal said: “We are protesting today against Harsimrat Badal because she is only doing ‘drama’ as when the bill was presented in the cabinet, she did not protest against it.”

He alleged that the SAD was cheating the people of Punjab and later did “drama” by resigning from the Union Ministry.

The SAD today said Punjab would honour them for the biggest sacrifice they have made for farmers but in reality, they signed the resignation with the blood of the people. So the Congress and the people of Bathinda were protesting against the SAD and asked it to stop doing “dramebaazi”.

The AAP leaders are also standing at Khanda chowk outside Takth Damdama Sahib in large numbers to show black flags and placards to the SAD leaders.

The protestors are shouting slogans “Badal family go back” against the SAD leadership.

While talking to mediapersons, Baljinder Kaur said: “Badal family is misleading farmers by becoming agents of Modi as on one hand, it says that the bills are not anti-farmers and on the other, it says we have failed to make them understand about these bills.”

She said they were representing farmers, arhtiyas and farm labourers as all are on roads today. “Our protest will continue till the time the Bills are not taken back.”

She said: “Resignation of Harsimrat Kaur Badal is the victory of the people of Punjab. She has not given the resignation. It was taken after they knew that their politics would be over due to the anger of the people.”