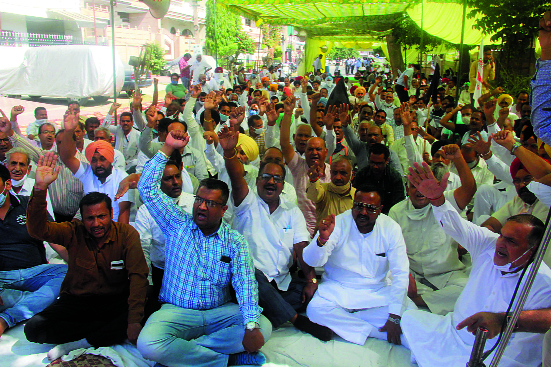 Members of the arhtiyas’ association protest outside the CCI office in Bathinda on Thursday. Tribune photo: Pawan Sharma

Arhtiyas from the cotton belt in Punjab, Haryana and Rajasthan today staged a protest outside the Cotton Corporation of India (CCI) office here.

They raised slogans against the government and the CCI, claiming the procurement agency was not making direct purchase from the market citing low quality or high moisture content in a bid to benefit private players.

As a result, private procurement agencies were forcing farmers to sell their produce at a much lower price than the MSP. Against the MSP of Rs 5,725 per quintal, farmers in the region were selling their produce at as low as Rs 4,600, they claimed.

With government agencies dragging their feet on cotton procurement, farmers had been subjected to loot by private traders who had been quoting prices below the MSP, they said.

Vijay Kalra, president of the Federation of Arhtiya Association of Punjab, alleged the agriculture input cost was increasing by the day, while government and procurement agencies in connivance with private companies were looting farmers.

Kalra said: “The farm laws will directly affect the farmers and commission agents.”

A CCI official said: “We purchase cotton with a moisture range of 8-12 per cent, but the crop being brought by farmers now has a moisture content ranging from 16-22 per cent. We are repeatedly urging farmers to adhere to the guidelines.”