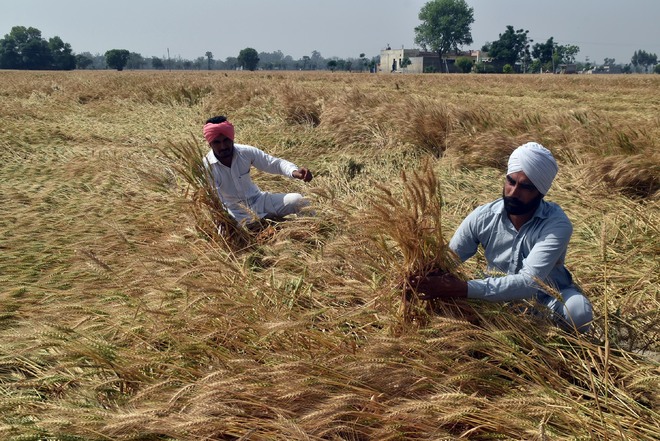 Though the procurement of wheat officially started on April 10, harvest in the south Malwa region is yet to pick up pace as the crop is wet due to recent rain.

The delay in harvest has dampened the festive spirit of Baisakhi for farmers this year. Farmers generally start coming to markets to sell their harvest by the time of the festival, but this season, harvest is yet to pick up momentum.

We were expecting a bumper crop this time but the vagaries of weather have affected the crop in various areas. The delay in harvest has dampened Baisakhi celebrations.

Shingara Singh Mann, state secretary, BKU (Ekta Ugrahan), said: “We were expecting a bumper crop this time but the vagaries of weather have affected the crop in various areas. The delay in harvest has dampened Baisakhi celebrations.”

Gurdev Singh, a farmer of Naruana village in Bathinda, said his crop was ripe but had high moisture content and it would take one more week to harvest it. Even the procurement in the initial days has started at a snail’s pace. The farmers who have brought their produce to the grain market are feeling harassed.

Jagdev Singh of Katar Singh wala village said “I came at the grain market in Bathinda with my crop on April 9 evening, but still it has not been procured”. Even commission agents are confused over the direct benefit transfer (DBT) issue. A commission agent said they didn’t know how the payment regarding produce would be made this season.

Bathinda Deputy Commissioner B Srinivasan said so far about 11,545 metric tonnes of wheat had arrived in the grain markets and various procurement centres in the district. This year over 10 LMT of wheat was expected to arrive at the mandis of the district.

Chief Agriculture Officer, Bathinda, Dr Bahadur Singh said the harvest had been delayed due to the prolonged cold weather in the region. It will pick up pace by next week, he hoped.