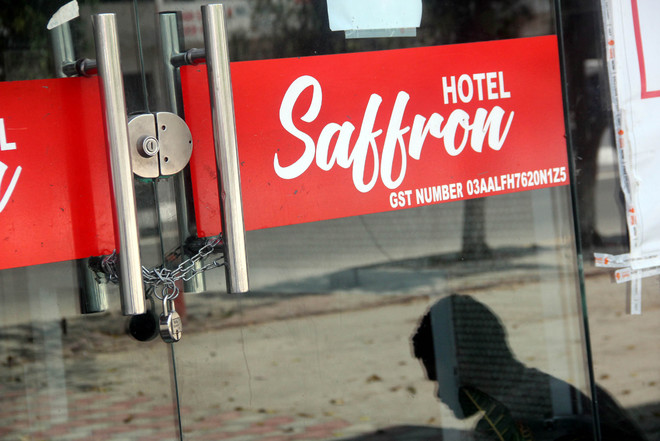 A closed hotel in Bathinda during the lockdown. Tribune photo

Giving a thumps down to the economic stimulus package announced by Union Finance Minister Nirmala Sitharaman last week, the Punjab Hotel Association has demanded a bailout package for the hospitality sector.

Satish Arora, president of the association, said: “The hospitality sector, which provides jobs to many, has faced a huge loss in the past couple of months. It is disappointing that the state government has not announced a package for reviving the sector.”

Moreover, what may be termed as a double whammy for the hoteliers, a majority of the NRIs coming back under the Vande Bharat scheme have opted out of paid quarantine, leaving many hotels under heavy losses, he said.

As per the plan, hotels had readied around 3,750 rooms, but so far less than 10 per cent rooms have been rented out to NRIs in the state.

Arora said the Union Government should announce a bailout package for the sector immediately, including deferment of all statutory liabilities such as EMIs to a minimum of 12 months at the Central, state and municipal levels and subsidise employment for three months, contributing 50 per cent of the salary per employee.

Further, he demanded that lease, licence, rentals and excise fee as well as property tax should be suspended from March 11 till the end of Covid pandemic, enable GST collected to be used as working capital for six months and utility costs such as electricity to be charged on actual versus the load.

“Along with the losses, we now have the major issue of labour (migrant workers) as most of the staff working in hotels hailed from Jharkhand, Uttar Pradesh, Uttarakhand, Himachal Pradesh, West Bengal, Bihar and they have left for their hometowns,” Arora added.