Farmer unions protest outside FCI offices in Bathinda and Mansa 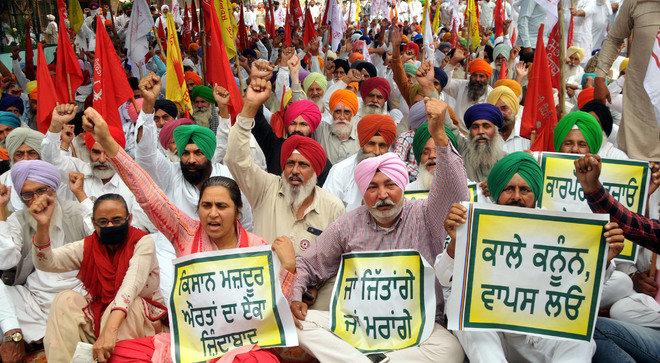 Farmer unions staged protests outside FCI offices against new procurement norms and quality specification announced by the government in Bathinda and Mansa districts. Protesters also raised slogans against the central government for its move regarding the direct transfer of payment for procurement of crops into farmers’ bank accounts.

Scores of farmers, under the banner of Ugrahan, Sidhupur, Dakonda and Lakhowal factions of the Bhartiya Kisan Union (BKU) and other organisations owing allegiance to Samyukt Kisan Morcha, particpated in the protest.

BKU (Sidhupur) general secretary Baldev Singh Sandoha said: “We strongly condemn the Centre’s new procurement norms. These will affect many farmers as a large quantity of wheat would not fall under the moisture content limits fixed by the government. They, therefore, would be coerced to sell it to private agencies on low rates. These are devious plans of the government that is trying to give reins of agriculture sector in the hand of private players. If the decision is not revoked, protests would be intensified in the coming days.”

BKU (Ugrahan) president Ram Singh Bhaini Bagha said: “With such moves, the Centre wants to weaken the government procurement agencies and end the public distribution system (PDS) and APMC mandis. This is being done to help private players enter the market to not only fix the prices as per their business interests, but also exploit the agriculture sector at the expense of farmers. If the decision with regard to DBT and revised procurement norms for wheat are not revoked, we will start the gherao of government procurement agencies’ officials in the coming days.”