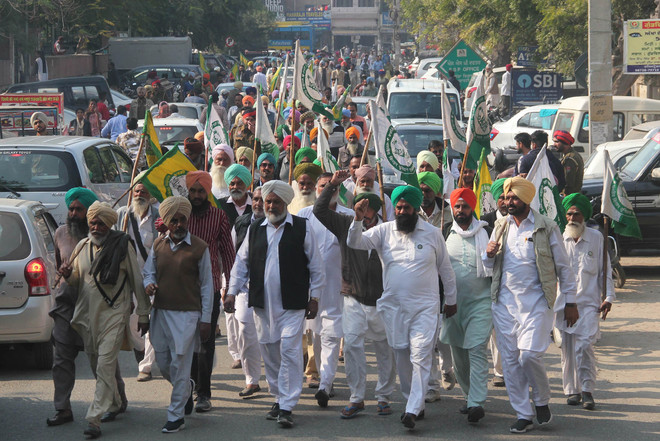 Members of the BKU Ekta Ugrahan and the BKU Dankonda on way to gherao the DSP office in Bathinda on Monday. Pawan Sharma

Members of the Bharatiya Kisan Union (BKU) Ekta Ugrahan and the BKU Dakonda on Monday staged a joint protest and gheraoed three DSP offices in the district demanding the cancellation of cases registered against farmers for burning stubble in the district. They alleged the state government was committing atrocities on farmers through the police.

Moreover, they demanded that even red entries marked against the farmers who burnt stubble in revenue records should be cancelled.

The farmers in large numbers gathered and staged a protest in front of the offices of the DSP (Bucho), the DSP (Maur) and the DSP (Phul).

During the protest, state leader Jhanda Singh Jethuke, district president Shingara Singh Mann alleged that the Capt Amarinder Singh-led government had failed to come up with a comprehensive plan to manage stubble. The NGT had directed the state governments to provide marginal farmers with machines to lift paddy residue and manage paddy residue on their own. But instead of providing a solution to farmers, the government had registered cases against them and even red entries had been marked against them in revenue records.

They said, “We are demanding a bonus of Rs 200 per acre for the last many years and if it will be given, then farmers will not burn stubble burning.”

They alleged that farmers could not get government assistance to dispose of the stubble, so they were left with no other alternative but to burn it in the fields.

“Instead of providing alternative solutions to farmers, the government is trying to create fear among them. It has put burden on farmers to manage stubble on their own. Farmers in the state are already reeling under debt and now by imposing fines, the government has broken their backbone,” they said.