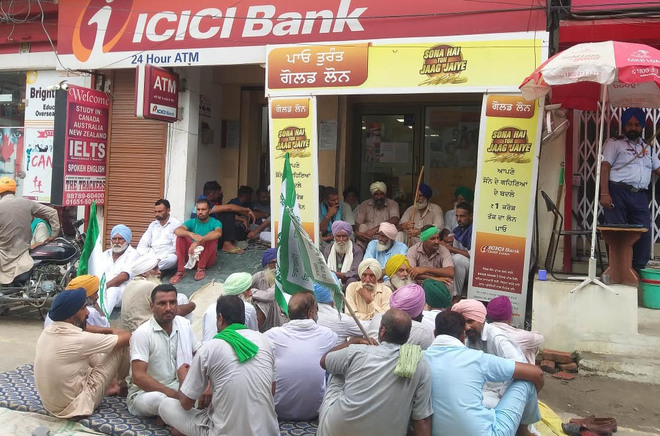 BKU (Sidhupur) members stage a protest outside a private bank at Rampura Phul in Bathinda.

BKU (Sidhupur) leader Kaka Singh Kotra alleged in 2015, a farmer, Davinder Singh, of Daulatpura village had secured a loan of Rs 1 .07 lakh against 7.50 tola gold jewellery. In June 2016, bank officials allegedly auctioned the jewellery over the non-payment of the loan.

Punjab farmers to attend UP mahapanchayat

Kotra alleged the farmer owed Rs 1.25 lakh to the bank, but they sold the jewellery worth Rs 3.65 lakh. Terming the auction illegal, the union demanded a refund of Rs 2.42 lakh to the farmer.

Though BKU Sidhupur leaders refused to call off the protest until the bank refunded the amount, they relented on the assurance of Phul DSP Jasbir Singh that the matter would be resolved by September 7. Farmers threatened to resume the protest, if they didn’t get the money.

“A meeting will soon be fixed between farmers and bank officials to resolve the issue,” the DSP said. Despite repeated attempts, bank officials couldn’t be contacted. — TNS