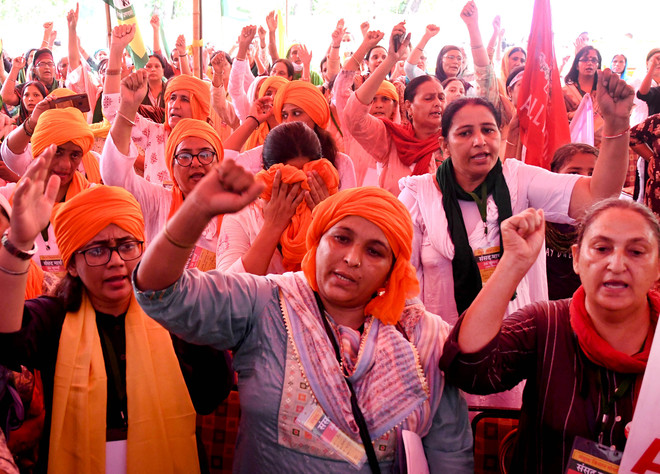 Women have emerged at the forefront of the farmers’ protest.

Breaking all stereotypes, women have emerged at the forefront of the farmers’ protest against the farm laws at Delhi borders. This has led to a new awakening to gender equality among the male-dominated mindset in the state amid the farmers’ protest.

Women of all ages are out in open along with their families as well as alone, demanding repeal of the farm laws. For the past six months, they have stayed put despite Delhi’s bone-chilling winter and now sultry hot conditions. Even though they are faced with issues of lack of toilets, privacy and hygiene among others, they are holding their ground.

At the forefront of the protest, these women continue to impress everyone with their oratory skills by singing rebellious songs, giving fiery speeches and raising anti-government slogans.

Shingara Singh Mann, secretary, BKU (Ekta Ugrahan) said: “We have always believed that women should be given equal opportunities. They are no less than men in any aspect, due to which our union has mobilised women in large numbers to participate in the protest.”

Mohinder Kaur, 80, of Bahadurgarh Jandian in Bathinda, who hit the national headlines after Kangana Ranaut twitted her photo, said: “I went to Delhi to participate in the protest to save our land.” Paramjit Kaur of Bathinda, who along with his 10-year-old daughter is at the Tikri border: “For us, land is everything. If we don’t have it, how will we survive? It is the fight for our survival, so we will be stay here until these laws are repealed.”