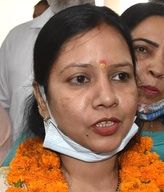 First-time councillor from ward No. 35 Raman Goyal was elected Mayor of the Bathinda MC today. She is the wife of liquor contractor Sandeep Goyal. Her election has come as a surprise as veteran Congress leader Jagroop Singh Gill, who won for the record seventh time, was seen as the frontrunner.

Party sources said her husband’s proximity to Jaswinder Singh Jugnu, a liquor contractor and a close aide of the Finance Minister, was behind her selection.