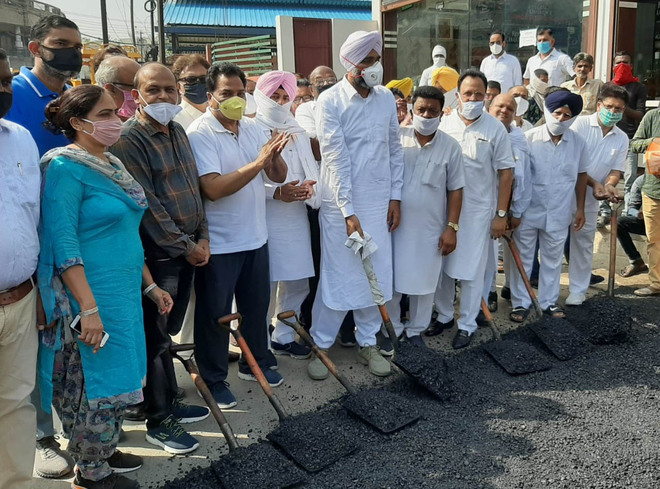 Bathinda: Finance Minister Manpreet Singh Badal violated the norm of social distancing while inaugurating development works worth Rs 15 crore in the city on Sunday. A large number of Congress leaders and workers gathered on the Amrik Singh Road and posed for pictures with Manpreet. The Finance Minister had recently completed home quarantine. He went into isolation after Bathinda SSP Bikramjt Singh Virk, with whom he had shared the stage during Independence Day celebrations, tested positive.

Ludhiana: Farmers across the state are not only discussing their problems with the experts online but are also seeking solutions that they can adopt. Pest management, soil irrigation, plant diseases, there is a whole range of issues that the farmers discuss with the experts. By their own admission, the farmers kept waiting for the weekly interactive session. Recently, a senior entomologist addressed the queries of the farmers regarding insect-pest management in kharif crops. "For us, it is the best option in the times of the pandemic, when mobility is restricted because of the precautionary measures," a 55-year-old farmer said.

Gurdaspur: The Gurdaspur police, while trying to solve the case of a car robbery, stumbled upon a motorcycle thief and managed to recover 22 bikes from him in just 48 hours. A few days ago, a Verna car had been stolen at gunpoint from an eatery on the Dinanagar road and subsequently the cops started to identify places where robbers might have sold parts of the vehicle. They tracked a bike thief doing business in the jurisdiction of the Ghuman Kalan police station. He and his gang used to steal bikes from crowded places in Gurdaspur and later disposed them of in surrounding satellite towns. SSP Rajinder Singh Sohal said it was surprising that his men hit a jackpot while trying to solve a minor crime.

Abohar: When the low-height overbridge was constructed here about four years ago, to connect the old walled city to Nai Abadi and other colonies located on the other side of the railway station, political parties vied to claim credit for it. But now, nobody is paying heed to the deteriorating condition of the bridge that is used only by bikers. The riders risk their lives as its floor tiles are damaged and some pieces of the iron-railing are missing. In the past five months of suspension of trains due to Covid, none of the renovation schemes have been taken up for Abohar station.