For Badals, it’s fight for pride in Bathinda 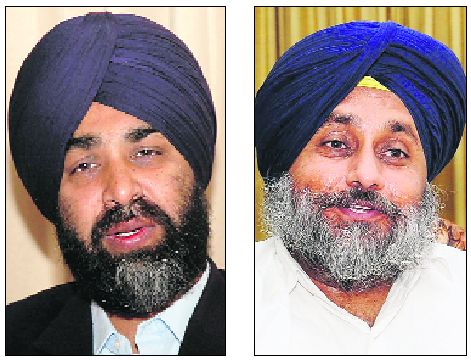 The home turf of the Badal family, Bathinda, is witnessing a fight for the pride. A lot is at stake for cousins Finance Minister Manpreet Singh Badal and SAD president Sukhbir Singh Badal in the Bathinda MC polls.

Both are actively campaigning for their candidates and trying to strike an emotional chord with locals. Manpreet is leaving no stone unturned to ensure the Congress gets a majority in the MC polls for the first time, while Sukhbir is banking on anti-incumbency, which helped party MP Harsimrat Kaur Badal to secure a lead from Bathinda (urban) in the 2019 Lok Sabha elections.

Manpreet along with his wife Vinu Badal, son Arjun and brother-in-law Jaijeet Singh Johal are holding public meetings and door-to-door campaign for the candidates daily. Sukhbir visited the city for the fourth time today and held various public meetings in favour of the party candidates. However, with the polls just a week away, the Bathinda MP has not yet campaigned for party candidates in the city.

Addressing public meetings, Manpreet exhorts people to elect the Congress with a clear majority, which hasn’t happened to date, for the development of the city, stressing when the SAD-BJP was in power in the Bathinda MC for three years, it withheld many development projects. He also not forgets to point out the effective steps taken up by the state to tackle the problems of waterlogging and sewerage in the city.

The FM lashes out at the Centre for withholding funds for Punjab in a bid to stop the development work. “Despite this, we have done well to bring the economy back on track,” he says.

Sukhbir, on the other hand, tries to strike an emotional chord during his public meetings. He invokes the connections of his family with Bathinda and how they nurtured it by bringing many projects like AIIMS, refinery, airport, cancer institute and many other key projects to change its face.

Targeting his estranged cousin, Sukhbir says: “Ration sent by Harsimrat Badal during the lockdown was not distributed and was siphoned. SAD patron Parkash Singh Badal has started many welfare schemes for the poor, but many of them have been discontinued.”