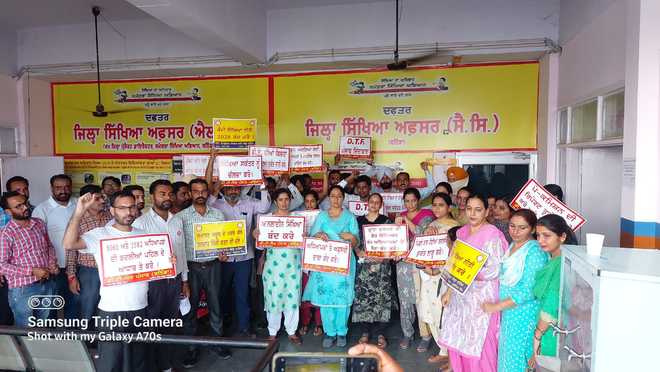 Members of the Democratic Teachers’ Front in Bathinda on Friday.

The Democratic Teachers’ Front gheraoed the Education Department’s office in Bathinda to lodge a protest over the National Achievement Survey (NAS) today. The union members gathered outside the district education officer’s office and raised slogans against the state government and department.

The leaders alleged senior officials of the department had been laying emphasis on improving Punjab’s standing (nationally) in the NAS so that political mileage could be gained in an election year and as a result, studies of students were getting affected.

Resham Singh Khemuana, president of the union, said, “Academics have taken a backseat after the directions of senior officials of the Education Department. Their entire focus is on improving Punjab’s standing in the NAS. Teachers of government schools have been directed to prepare students for tests (conducted on a weekly basis). For department officials, the NAS has become the top priority.”

Later, a meeting between the district education officer and representatives of the union remained inconclusive with the former making it clear that as per the directions of the higher authorities, they will remain committed to score well in the NAS. Baljit Singh Sandoha, Deputy District Education Officer, said, “Laying emphasis on the NAS is being done not to wean away students from academics but to improve them. It is focused on developing behavioural and practical knowledge that can be applied in real-life situations.”