Getting slum kids to school his only mission 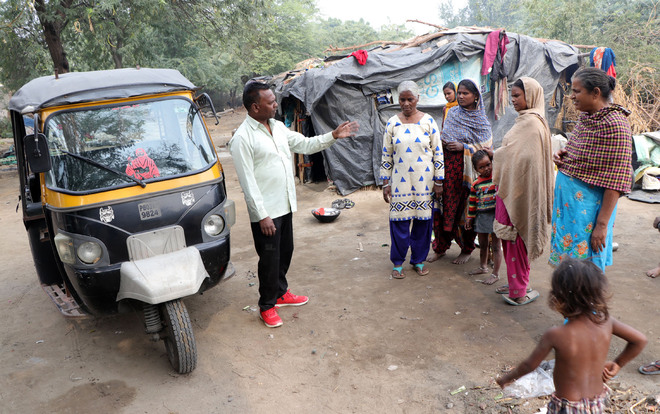 “Not all of us can do great things, but we can do small things with great love.” These soulful words of Mother Teresa, the epitome of selfless service to humanity, resonate perfectly with an auto-rickshaw driver in Bathinda.

In a rare selfless gesture of serving society while earning bread and butter for his family, Suresh Kumar has been visiting slum areas in different parts of the city to convince parents of deprived children to get them admitted to government schools. Kumar picks and drops slum children daily and he has been getting paid by SMILE foundation that provides education to underprivileged children.

It was 11 am on a Wednesday morning at a slum area adjacent to Gopal Nagar where auto-rickshaw driver Suresh Kumar, as usual, tried to convince Gomti Devi to get her three daughters admitted to a government school. Five minutes later, her husband barged in and entered into a verbal duel with Suresh while being adamant on not sending his daughters to school. Later, his neighbours pacified him. They sat on a cot in vehra (clusters of thatched houses with dingy rooms) and discussion regarding girls’ admission resumed. Half an hour later, the girls’ parents agreed to send them to school albeit on a condition that they would not have to to spend a single penny.

Talking to Bathinda Tribune, Suresh Kumar said, “Believe it or not, it’s a daily ordeal for me. Convincing parents of deprived children is a tough nut to crack. They often get charged up and enter into heated arguments on a few occasions. You also run the risk of getting beaten up at their hands. In past three years, I have managed to get around 65 slum kids admitted to government schools in the city. If it was for me only, I would have lovingly devoted all my time to serve these kids but I am an autorickshaw driver who, owing to unpropitious circumstances of family, couldn’t acquire education properly. And there could not have been a perfect blend of earning your livelihood and serving people from downtrodden section of society.”

While he has been getting paid for the work he does (picking and dropping kids), Kumar has taken upon himself to venture beyond his work arena and spend hours to convince parents of underprivileged children on a daily basis.

Sukhi Ram, father of an 11 year old boy, says, “Kya karega ka yeh padh ke babuji? Thoda kaam sikha denge to chaar paise kama lega ghar ke kharche ke liye (sir, what will he do after acquiring education. I will teach him some work so that he may earn for household expenses).”

On being asked what sort of challenges he comes across while convincing parents, Kumar says, “Unlike most of us, parents of underprivileged children have given up on life already. All they care about is two square meal at the end of the day. Fathers of many children are into menial works, such as ragpicking and labour and some of them are either drunk or under the influence of intoxicants even in morning hours. Being in their vicinity is risky affair itself, let alone convincing them to get their children admitted to school.”

Kumar added, “Barely aware of the consequences, there are a few children who consume loctite (shoe adhesive, solotion in local dialect) and balm (cream meant for external use and applied for healing of pain) as intoxicants. The SMILE foundation members have always been my biggest support.”