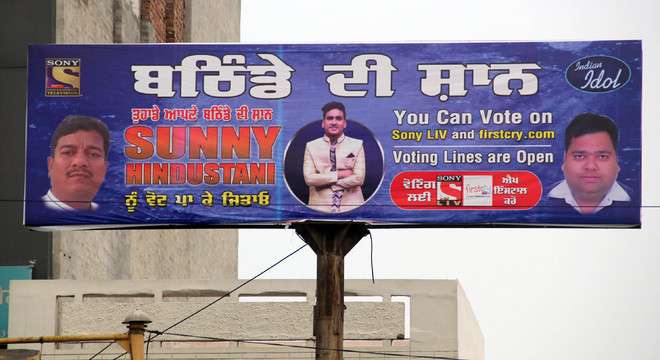 A hoarding of Indian Idol contestant Sunny put up near Tin Koni in Bathinda. Tribune Photo

After mesmerising everyone with his melodious singing in Indian Idol, Sunny, a shoeshiner from the city, has been garnering huge praise back at home. Now, residents have put up life size hoardings, flexes and posters at various busy junctions in the city, exhorting people to vote and support the singing sensation to make him win the show.

Residents said with his talent, Sunny had not only won many hearts and earned a name for himself, but also popularised the name of Bathinda. The hoardings and banners seeking support for Sunny have come up in areas such as Mall Road, GT Road, Tin Koni and markets.

“Now, it is our turn to reciprocate and seek support for Sunny who has brought laurels to the city. I have got 13 large size hoardings made and put up these at different locations in the city where maximum people can spot them. The idea is quite simple, we want everyone to take a note of these hoardings and do their bit by voting Sunny so that he can win the competition,” said Sanjay Kapoor, who runs a popular eatery, ‘Kapoor Corner’, in the city.

“After observing that I had placed an order for making hoardings to seek support for Sunny, flex and hoarding maker Mangalam Flexes’ owner himself got made a few flexes and put up these in different areas in the city. He even gave me concession on hoardings,” he added.

Besides, a dress designer in the city and a few advertising agencies have also got some hoardings made to seek support for the singer. Apart from banners and posters, more than 50 large and small size hoardings have come up in different parts of the city.

Talking to Bathinda Tribune, Sunny’s sister Rekha said, “I am very happy that my brother has made it to the top 10 after giving impeccable performances. People all across the country have been extending their support and we have full faith that Sunny will win the Indian Idol title. I urge each and everyone to vote my brother and make him win.”

Vijay Kumar, maternal uncle of Sunny, said, “Sunny’s mother had gone to Mumbai a few days ago and in the coming episode of Indian Idol, she will make an appearance in the show. Besides getting praise and support throughout the country, Sunny has also been getting a lot of support from city residents. They have put up big hoardings seeking support for him. They even honoured his mother and family at different functions.”