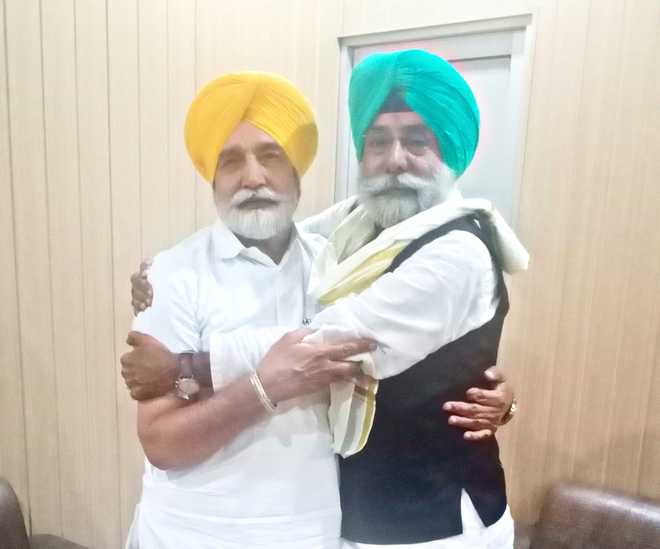 Jagmeet Brar with Sikander Singh Maluka at the latter’s home.

Politicians of all parties are facing stiff opposition from farmers over the three new farm laws, SAD-BSP candidate from Maur Jagmeet Singh Brar faced protest from farmers on the first day of campaigning when he visited a SAD worker at Maur Mandi.

As per information, BKU Mansa workers carrying black flags in their hands, started raising slogans against the SAD and they reached outside the SAD worker’s shop. When Brar came to know about it, he came out and tried to pacify them. He told them SAD president Sukhbir Singh Badal had motivated party workers to participate in farmers’ protest in big numbers.

Brar also announced that they would do everything to get the laws repealed.

However, farmers’ leaders said they would continue their protest against the politicians.

SAD leader Janmeja Singh Sekhon on Thursday courted a fresh controversy after a video went viral, showing him wiping his face with a ‘siropa’ given to him by the BSP during an event at Maur. BSP leader Joginder Singh downplayed the incident, saying he might have done it mistakenly

On the first day of his campaign, Brar paid obeisance at Maiser Khana temple and started his campaign, but absence of many circle presidents and senior local SAD leaders, who are considered close to Sikander Singh Maluka camp, raised concern for the SAD candidate.

In a major development, Brar today visited the house of Maluka, who was demanding the ticket for himself from Maur. Brar claimed Maluka and his family have assured him of full support.

Brar said, “Around 10 SAD leaders did not attended his event, but later I visited Maluka at his house and he has called all his supporters and told them to fully support me.”