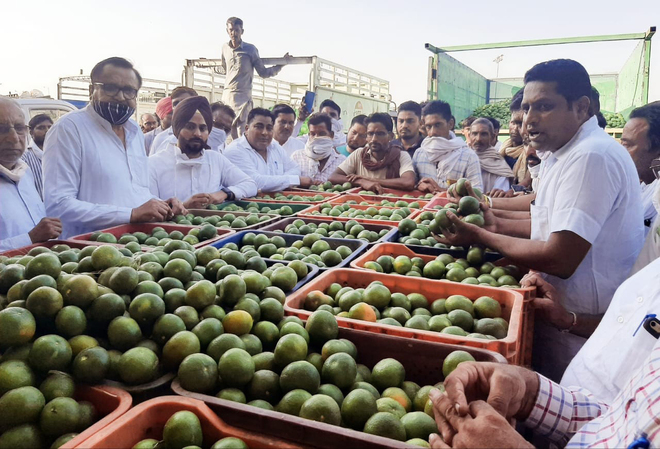 Kinnow and malta on sale at a market in Abohar. Tribune photo

The purchase of kinnow and malta has begun in the local mandi located at the new grain market complex here.

Abohar contributes about 65 per cent of the total kinnow and malta produce in the state. Despite drain water fury which affected dozens of orchards in the villages falling in the Balluana constituency, the subdivision was expecting a bumper crop, said a fruit grower.

Even as kinnow was not ripe, it was transported to retail juice processors. Besides, the first lot of 800 quintals was purchased by some businessmen at Rs 7 per kg. However, about 250 pieces of malta were sold at the rate of Rs 25 to 29 per kg, bringing cheer on the faces of farmers, who still prefer to grow citrus instead of its hybrid combination with orange known as kinnow.

A trader said kinnow, after ripening, might fetch a wholesale price of Rs 15 per kg after a month or so. “I have been receiving orders for green kinnow from Delhi, Noida, and Meerut,” said the trader. — OC