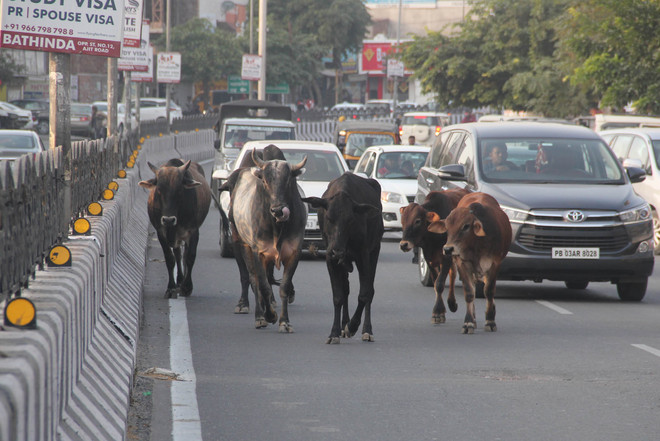 Despite repeated complaints, the civic body has failed to check the menace and commuters continue to suffer. Tribune photo

It seems that the civic body does not have any concrete solution to check the stray cattle menace in the city.

Stray cattle can be seen roaming freely in the city. The situation becomes worse at night when commuters find it difficult to sight stray cattle on roads.

Foggy days will add to the woes of the commuters. The authorities lack a plan to shift stray cattle to a proper place.

Residents seek required measures from the civic body to tackle the issue. They are of the view that the MC is collecting a cow cess on many items, but it has failed to resolve the issue.

Despite repeated complaints, the MC has not woken up from a deep slumber to check the menace.

Arshdeep Singh, a city resident, said, “It seems that the authorities have turned a blind eye towards the stray cattle menace. Many times, cattle left abandoned by their owners have attacked pedestrians and commuters. The MC should impose a fine on those leaving cattle on roads and residential colonies. Officials should act swiftly in this regard.”

Another resident Dr Vitull K Gupta said, “Despite charging a cow cess on various services, the government is not giving priority to construct adequate shelter houses for stray cattle. These can be seen roaming freely on roads, streets, colonies and chowks. Common people are suffering due to the menace.”

Gurleen Kaur, a city resident, said, “The MC should be made more accountable in an event of loss of property or death caused by stray animals. Children are not allowed to play in the open due to fear of stray animals.”