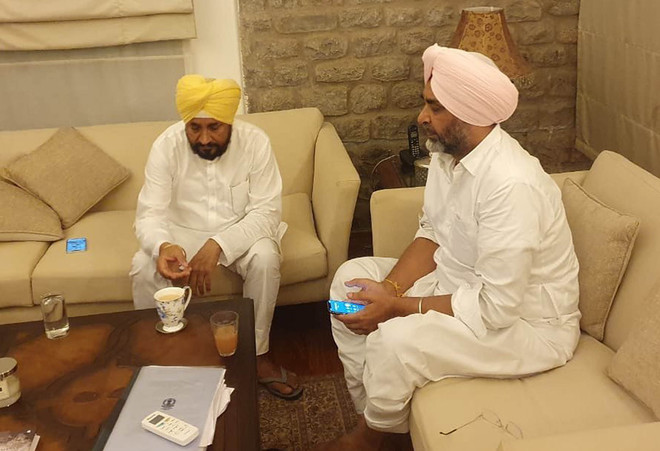 The choice for the Director General of Police (DGP) and the Advocate General (A-G) was not the only sticking point that irked Congress leader Navjot Sidhu, who resigned as the state Congress president yesterday.

Sidhu was reportedly annoyed with CM Charanjit Singh Channi, for cosying up to Finance Minister Manpreet Badal and seeking his advice on important matters after taking charge of the state.

In the last nine days, Manpreet and Channi have had several meetings at the Finance Minister’s residence in Chandigarh. Manpreet has posted pictures of the meetings on the social media. In one of the meetings, Deputy CM Sukhjinder Singh Randhawa was also present.

On Tuesday night, when party leaders were heading to meet Sidhu at his Patiala residence after he resigned from the post of the state Congress chief, Manpreet posted photos of Channi holding late-night discussions with him in Chandigarh. Sidhu was expecting Channi to take his advice on matters concerning the state, but Channi instead turned to Manpreet.

Channi, along with Randhawa and other ministers, had reportedly backed Sidhu for the PCC president’s post and spearheaded the campaign against then CM Capt Amarinder Singh. Once Capt Amarinder resigned, several lobbies within the Congress started staking their claim.

For the post of the new CM, Sunil Jakhar, Randhawa and Sidhu opposed each other. Later, Channi emerged as a consensus choice. However, after the change of guard, a regrouping took place within the Congress with Manpreet emerging stronger in the power corridors. Channi held meetings with him and sought advice on important matters, leaving Sidhu high and dry.

Manpreet, who remained tight-lipped over the tussle between the Sidhu group and Capt Amarinder, suddenly got into the limelight with Channi taking over as the CM.

Sidhu found himself on the back foot as Channi ignored his advice on the crucial appointments of the DGP and the A-G, and instead appointed Iqbal Preet Singh Sahota as the DGP and APS Deol as the A-G. Both have been under the cloud over sacrilege cases.

After visiting the Governor to stake claim as the next CM, Channi first visited Manpreet, his next-door neighbour in Chandigarh, on September 19. Sources claim Manpreet had a role to play in the last-minute change in the choice for the CM. Manpreet had apparently suggested Channi’s name, for he is a Dalit face.