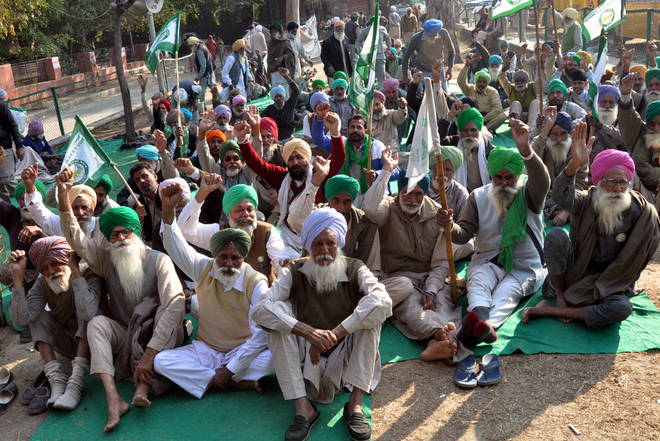 Farmers protest outside the DC office in Bathinda. Pawan Sharma

The BKU Sidhupur faction continued their protest outside the district administrative complex for four months now, demanding a government job to next to the kin of farmer who died after consuming some poisonous substance in Jaito.

The union members rued that the administration had been making “hollow promises” over the matter and it’s time that they intensify their stir now.

Resham Singh Yatri, a union leader, said, “The administration has merely been giving assurances but it has failed to deliver on them till now. We have been staging protests for the past over four months and will continue to do so until the family member of the deceased farmer, Jagsheer Singh, is given a government job.”

A meeting in this regard was conducted with Bathinda Deputy Commissioner on Monday, who has given an assurance that a senior official from the tehsil office has been tasked to get the matter resolved on priority basis. Meanwhile, farmers observed a two-minute silence to pay homage to deceased farmers, who have died during the agitation at the Delhi borders.