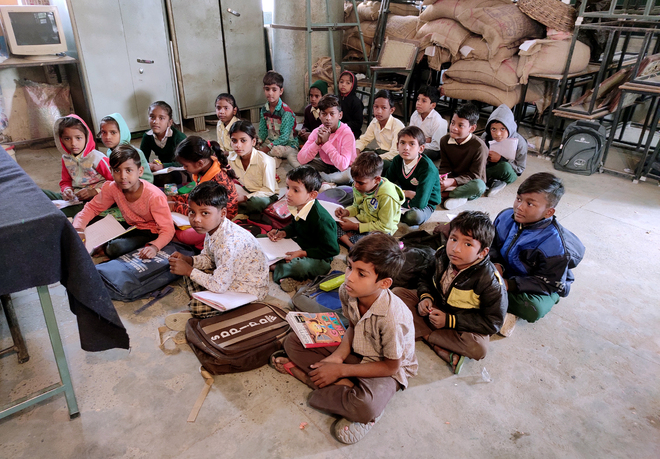 Students at various government schools are yet to receive winter uniforms this year. photo vijay kumar.

Though the winter season has set in, students of a number of government schools in the district are yet to receive uniforms. Funds for providing uniforms were released around one month ago, but many schools have failed to provide uniforms to the students.

During a visit by Bathinda Tribune to a number of government schools in the city, it was found that a majority of students were not wearing uniforms and those who were wearing uniforms were purchased last year. There are some schools where students have received winter uniforms.

Notably, the Education Department has submitted Rs 600 per student (for SC boys and all girls from classes I to VIII) for uniforms, but school authorities have been delaying the delivery of uniforms for reasons best known to them.

Head teachers from various government schools said they had already placed orders for delivery of uniforms and it would be just a matter of a few days before students would be given uniforms.

The head teacher of the government primary school, Janta Nagar, said they had received 30 per cent of uniforms though they had placed an order for 282 uniforms. Similarly, students at the government primary school, Parasram Nagar, have not received winter uniforms till now. The school students can be seen in shirts and trousers of different colours. Even they are not wearing sweaters though it is pretty cold in the morning. Some students whose parents can afford are wearing sweaters of different colours.

It is pertinent to mention here that students are provided uniforms — a shirt, pants, shoes, socks, sweater and a cap — by the Education Department.

Sources in the department said since orders for stitching after measurement of students were placed by all the schools, the suppliers got work in bulk that caused delay in delivery of uniforms. Sensing the lengthy procedure of the uniform delivery to students, the department could have anticipated and released funds well in advance so that students could have received their uniforms well in advance.

Hardeep Singh, DEO (Elementary), said, “We have already released funds for delivery of uniforms to the schools and there may be delay due to the placement of bulk orders for stitching of uniforms unlike previous year when uniforms were directly delivered by the department. Many schools have already provided uniforms to their students and the remaining schools would also provide the same soon.”