Homage paid to 12 from Mansa, Bathinda villages who died during farmers’ protest 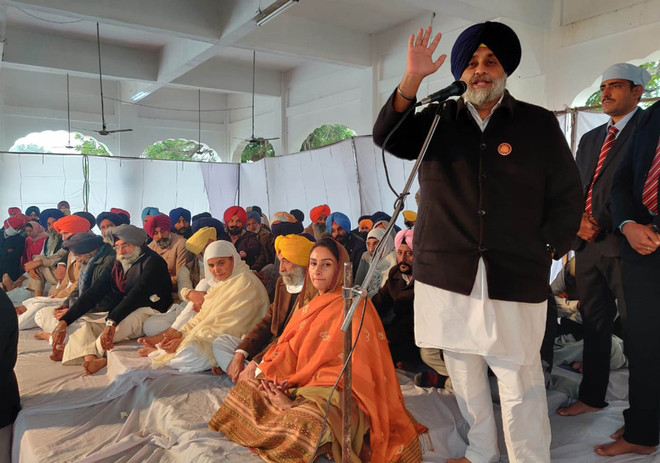 SAD president Sukhbir Singh Badal today said Prime Minister Narendra Modi had become arrogant and was impervious to sufferings of farmers who were braving extreme cold conditions while agitating peacefully on the borders of Delhi.

Addressing a large congregation at Takth Sri Damdama Sahib after the ‘bhog ceremony’ held to pay homage to 12 persons from Mansa and Bathinda villages who died during the ongoing farmer struggle, Sukhbir said: “The God takes care of people who become filled with their own ego. They meet their end soon in the eyes of people”.

He said the SAD had always supported farmers’ agitations and was in the forefront while fighting the Emergency with party patron Parkash Singh Badal being the first to court arrest.

Former Union Minister Harsimrat Kaur Badal said the Prime Minister’s image had taken a beating in the country as well as the world, and it was a matter of time when his chair would also be threatened. She requested PM Modi to visit the agitating farmers and listen to them, saying the Cabinet Ministers did not have the guts to tell him the truth. She said if the Prime Minister listened to the farmers sincerely he would repeal the three farm laws.

She also requested the farmer organisations to hold direct talks with the Prime Minister, saying talks with ministers would not yield anything. She also rubbished the propaganda unleashed by the BJP that two out of the four demands of farmers had been met, saying doing away with two proposed Bills did not amount to anything and the core issue of assured procurement at MSP remained unresolved. Prayers were also said for peace to the departed souls and a cheque for Rs 1 lakh was given to their family members.