Politics hots up over 2 Bathinda flyovers 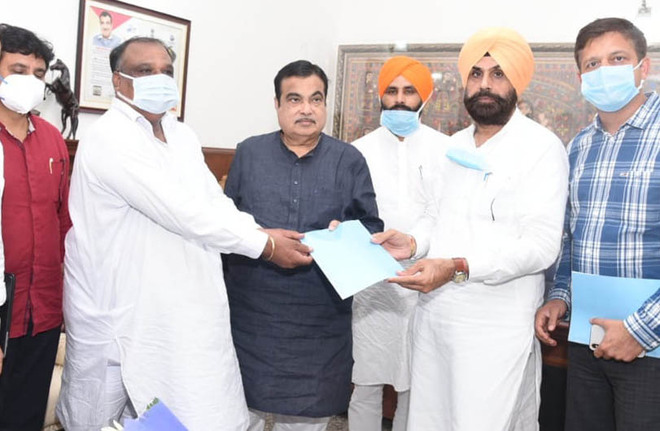 A BJP delegation with Union Minister Nitin Gadkari in Delhi.

Politics has intensified over two flyovers coming up on the Barnala road, a day after a delegation of residents headed by BJP state general secretary Dyal Sodhi met Union Minister Nitin Gadkari in New Delhi. Bathinda MP and former Union Minister Harsimrat Kaur Badal along with SAD leaders also held a virtual meeting with Gadkari over the same issue on Tuesday.

Sodhi said: “We apprised Gadkari of the problems likely to be faced by people of the city with the construction of the sand-filled bridge.” A delegation member said Gadkari assured the people of Bathinda that welfare of citizens of Punjab was their top priority and a suitable alternative to the proposed bridge on the Barnala road would be announced shortly.

Harsimrat took to Facebook and posted: “Spoke to Minister of Road Transport Nitin Gadkari regarding the overbridge where reinforced earth walls are being built on the Barnala bypass in Bathinda. Urged the minister to get the overbridge pillars redesigned to eliminate the distress of residents. He has assured to get the project executed as per the wishes of people.”

Finance Minister and Bathinda MLA Manpreet Singh Badal laid the stone of the flyovers on August 7. The project has an estimated cost of Rs 50 crore. However, ever since work started on the project, residents have been demanding an elevated road instead of a sand-filled walled bridge.