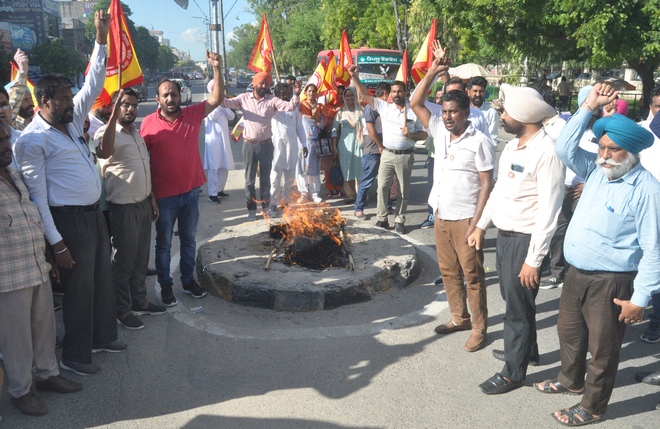 Members of the Joint Teachers’ Front protest in Bathinda.

Members of the Joint Teachers’ Front burnt an effigy of the Education Department Secretary, accusing the latter of laying emphasis on improving Punjab’s ranking in the NAS (National Achievement Survey) while “compromising academics of students in the process”.

The union representatives also alleged that since Assembly elections were due next year, the department officials were implementing decisions at the behest of their political masters. Members of the joint front gathered near the Ambedkar Park area and raised slogans against the department before burning an effigy of the department Secretary. Notably, to mark their protest against the policies of the department, the front had given a call to stage a protest and burn the Education Secretary’s effigy in which ever district he visits.

Department officials are taking decisions which will give the control of academics in the hands of corporate houses in future. Such decisions will not be tolerated. —Resham Singh Khemuana, Teachers’ front president

Democratic Teachers’ Front president Resham Singh Khemuana said: “The department and its officials are taking decisions which will give the control in the hands of corporate houses in future. We have unanimously decided that such dictatorial approach and decisions of the department will not be tolerated at all.”

Vikas Garg, another leader, said: “We demand that the pay commission’s amended report be implemented at the earliest, services of contractual employees be regularised, old pension scheme be restarted and vacant posts are filled by recruiting teachers on a regular basis.”