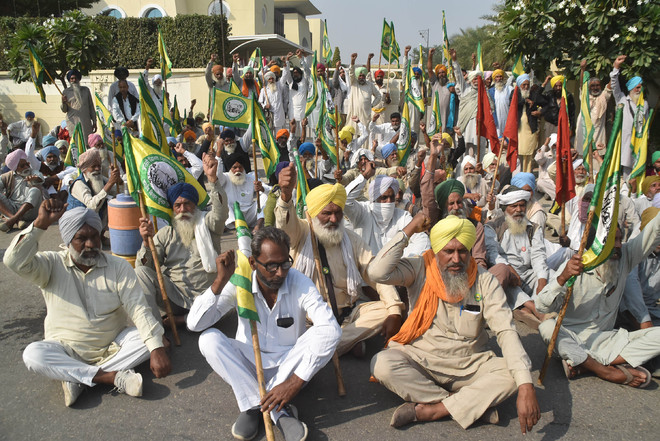 Farmers hold a sit-in outside the venue for the BJP’s event in Bathinda. Photo: Pawan Sharma

Farmers under the banner of the BKU (Ekta Ugrahan) today staged a protest outside the venue for BJP state president Ashwani Sharma’s event organised by party leader Veenu Goyal here.

As farmers got the information about the BJP senior leader’s expected arrival here, they reached the venue and staged a protest outside the main gates.

The farmers raised slogans against the party and said they would continue to protest its events across the state till the Centre repealed the three farm laws.

Union leaders Harjinder Singh Buggi, Jagdev Singh Jogewala and Paramjit Kaur Pitho said farmers had been fighting for repeal of the central laws, including one imposing heavy fines and penalties on farmers for burning straw, for over an year. “Unions have been fighting on the Delhi border for over a year, but the Modi government at the Centre is adamant on not repealing these laws, which are in the interest of corporate houses,” said the leaders.

On his part, Goyal said: “She had organised an event in which 400 families were to join the party and state president Ashwani Sharma slated to attend the event. However, he could not join them as he had to head to Delhi and instead sent state unit vice-president Jaswinder Singh Dhana.”

She said in a democracy, everyone had the right to hold functions or join a party of their choice. Staging such protests amounted to “murder of democracy”. — TNS

Jaito: Deputy Chief Minister OP Soni faced farmers’ protest during his visit to Jaito town on Sunday. He was on a day’s visit to Faridkot, Kotkapura and Jaito. Soni was to attend public functions, but farmers prevented him from attending some. They demanded answers to their queries regarding the shortage of DAP, debt waiver for farmers who died at Delhi protest sites. TNS