Say no let-up till farm laws rolled back 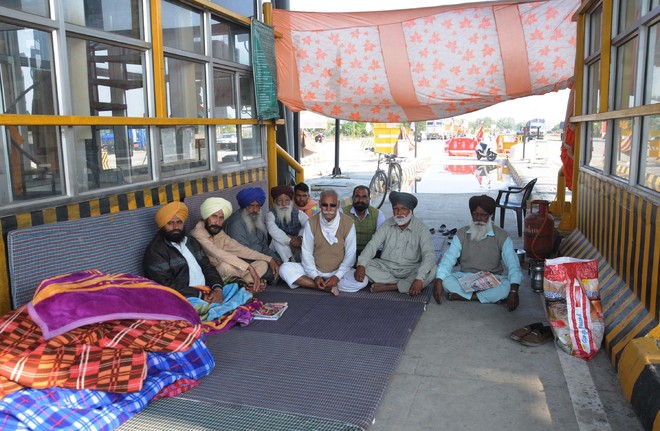 Farmers hold a sit-in at a toll plaza in Nawanshahr.

Scores of farmers under the banner of the Bhartiya Kisan Union (Ekta Ugrahan) staged a dharna near Mittal Mall in Bathinda where BJP leaders reportedly were to lay the foundation stone of a new office on Thursday.

BKU (Ekta Ugrahan) general secretary Harjinder Singh said: “When we came to know that BJP national president JP Nadda was to lay the foundation stone of a new office in Bathinda, we asked farmers to gather at the site to lodge the protest against the party. We won’t let the BJP leaders and workers to step foot in the state.”

Following the farmers’ stir, the BJP postponed the foundation stone-laying ceremony of 10 district offices in the state, including in Barnala, Mansa and Bathinda. Later, the union members carried out a protest march in the city and raised slogans against the Centre. In Sangrur too, farmer organisations organised a protest march from the Sangrur railway station to Uppli road, where BJP wanted to open an office.

Moga farmers up the ante

Farmers on Thursday stepped up their protest against the farm laws in Moga district. A group of farmers protested outside a silo (foodgrain store) constructed by Adani Agro-Logistics at Dagru village.

Another group of activists of the Kirti Kisan Union, BKU (Krantikari), BKU (Lakhowal) and Hind Kisan Sabha held a sit-in near the railway station.

Two other groups protested at a toll plaza on the highway in Chand Purana village and a petrol pump owned by the Reliance Group at Rajeana village.