Call it an attempt to fill coffers of private players 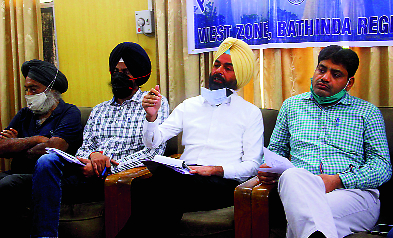 The PSEB Engineers’ Association critised the decision of the Punjab State Power Corporation Limited (PSPCL) to sell the Guru Nanak Dev Thermal Plant (GNDTP) land in Bathinda to the Department of Housing and Urban Development.

Jasvir Dhiman, president, PSEB Engineers’ Association, said here today, “The PSPCL management has transferred the GNDTP land valuing Rs 4,000 crore to the Housing Department, and is now planning to sell it at Re 1 to private players for 99 years.”

Dhiman said, “In the name of a proposed pharmaceutical park at the thermal land, it is an attempt to fill the coffers of a few private players. The administration has broken the trust of farmers, who vacated their land for the thermal plant years ago. The people of Punjab have been coerced to pay high electricity charges.”

Jatinder Garg, senior vice-president, said, “It was proposed that the revenue from the sale of the thermal plant land will be reinvested in the power sector, which will reduce the tariff for the consumers. However, now the valuable land will be offered for free to private players.”

Garg said, “The PSPCL management has agreed to the district administration to occupy houses at the thermal colony, Bathinda, on a nominal rent, while earlier the BOD, PSPCL, had decided to sell the houses to the state government against payment.”

Padamjit Singh, chief patron, Punjab State Engineers’ Association, said, “The state government decided to close down a running plant, and rejected all proposals by experts from the power sector to establish a biomass plant and a solar plant. These proposals would have provided cheaper renewable electricity to the consumers. When the department is already grappling with staff shortage and failing to dispense quality services at ground level, the government has decided to relieve hundreds of outsourced workers.”