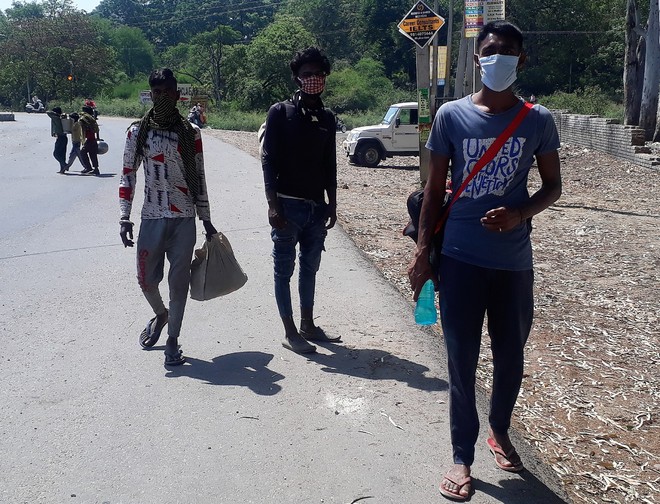 The workers, on the way to their homes in Ropar, in Talwara. Tribune photo

In the absence of the public transport facility, workers who came from other districts of the state are being forced to walk to their homes.

Ajit Singh, Pawan Kumar and Kali of Bhakra Mohalla, Ropar, who were working with a mason in Talwara for a long time, have left for their native place on foot as their work had stopped due to the curfew.

They said after the lockdown, they got food for two times through social organisations of the area. After some time, they stopped providing food. Due to it, they started facing a lot of problems.

Fearing starvation, they decided to go home as there is no work and food. Thereafter on Tuesday morning, they started their journey to home on foot with a bottle of water.

The workers said there was no proper arrangement for sending migrant labourers trapped in Talwara to their native places. They said that they had applied online in this regard, but to no avail.

The workers said they wanted to go to Ropar via Nangal from Una in Himachal Pradesh as it was a shorter rout. But, the Himachal Pradesh police are not allowing people to enter the state. Thereafter, they left for Ropar to cover around 150 km.