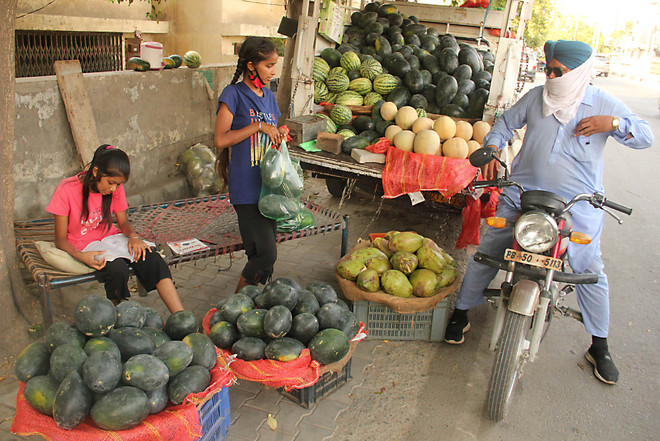 Roshni attends to a customer while her sister Nitu studies using her father’s phone in Bathinda. Photo: Pawan Sharma

It is 12.45 pm and the mercury has already touched 42°C. Roshni (16), while arranging watermelons on a roadside vend, bargains with a customer and her sister, 13-year-old Nitu, is busy doing her online assignments over the phone.

If you ever happen to pay a visit to this fruit vend at any hour of the day, you will spot these girls either studying or attending to customers.

Burning the midnight oil, Roshni (16) and Nitu (13) are not only supporting their father to earn enough for two square meals a day in these tough times, but also taking online classes with utmost sincerity. Roshni says she wants to join the police force, while Nitu wants to serve the armed forces

Burning the midnight oil, the sisters from a poverty-stricken family are not only supporting their father to earn enough for two square meals a day in these tough times, but also taking online classes with the utmost sincerity.

While engrossed in assignments, Roshni often finds it distracting when all of sudden a customer comes at the stall. But then the thought of helping her father fills her with pride.

Talking to The Tribune, Roshni said, “The Covid outbreak has hit us hard. We exhausted all our savings in the lockdown. My father has chronic backache and he cannot sit for long and need rest. Since our schools are shut amid the pandemic outbreak, we decided to support our father in his fruit-selling business and continue our studies as well.”

Roshni, a Class X student, wakes up at 3 am. After getting ready, she along with her father heads straight to the mandi to get fruits. Later, they put a stall near the Rose Garden area to sell the fruits to early birds who come there for morning walk. After two hours, they move to the Bibi Wala road and sell fruits till 8 pm.

“My father has raised us like sons, though in my native village at Ganganagar in Rajasthan, girls are considered as someone who need to be protected and married woman are supposed to wear “ghunghat” all the time,” said Roshni.

Their father Om Parkash was a driver earlier. However, owing to certain health conditions, he started selling helmets on the roadside. Now for the past five years, he has been selling seasonal fruits in the summer while in winter he again switch to the sale of helmets. Their mother is a housewife.

Asked about their aim, Roshni says she wants to join the police force while Nitu wants to serve in the armed forces.