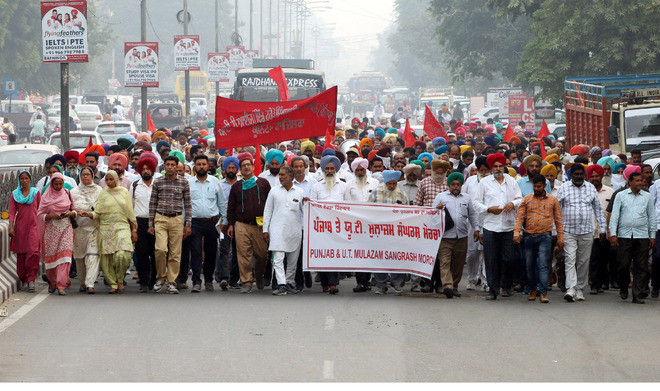 Members of the Punjab and UT Mulazam Sangharsh Morcha protest in Bathinda.

Members of the Punjab and UT Mulazam Sangharsh Morcha staged a protest against the state government, demanding to release the outstanding DA instalments, and to abolish Rs 2,400 development tax.

Members took out a protest march in different parts of the city and raised slogans against the state and the Centre. Ravinder Luthra, state convener of the union, said, “Unemployment is increasing at an alarming rate and government employees are given forced retirements. There are attempts to give reins of public sectors in the hands of corporate houses.”

Luthra said the DA instalments had been lying pending for the past 158 months, and the government had imposed development tax, causing additional financial burden of Rs 2,400 on employees annually.

The protestors demanded regularisation of the contractual and outsourced workers, who had been rendering services in different government departments. — TNS