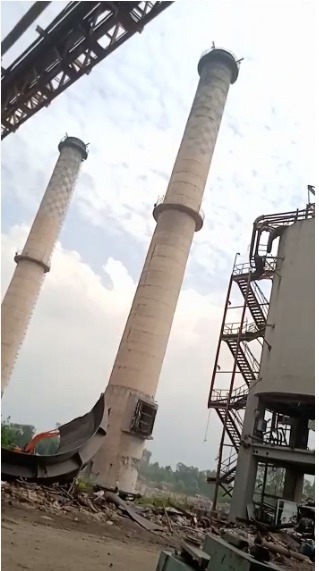 The GNDTP chimneys being razed.

The local administration on Friday demolished two towering chimneys of Guru Nanak Dev Thermal Plant (GNDTP) here. With this, final hopes of resuming operations have also been dashed to the ground, said members of the GNDTP Employees’ Federation.

We are planning to get heritage site status for four cooling towers that have become a symbol of the city over the years. — Gursewak Singh Sandhu, President, GNDTP Employees’ Federation

Lashing out at the government, a representative of the GNDTP Employees’ Federation said had the government made “genuine efforts”, the work could have been resumed at the thermal plant.

Established in 1969 on Guru Nanak Dev’s 500th birth anniversary, the GNDTP was inaugurated by then Prime Minister Indira Gandhi amid much fanfare. Built with Russian technology, the thermal plant had four units that generated 440 MWs of electricity. Meanwhile, crores of rupees were spent on renovation of the thermal plant on different occasions in the past two decades.

Talking to The Tribune, Gursewak Singh Sandhu, president of GNDTP Employees' Federation, said, “Today is the dark day in the history of state as two chimneys of the thermal plant have been dismantled by the government. The government's claim that power generation was expensive here does not have any substantive basis. An RTI reply had revealed that the per unit power generation cost here was Rs 4.76 instead of Rs 11 per unit claimed by the government.”

To stop further demolition, we are planning to get heritage site status for four cooling towers that have become a symbol of the city over the years. By making some modifications, these can be utilised for promotion of tourism," said Sandhu. .