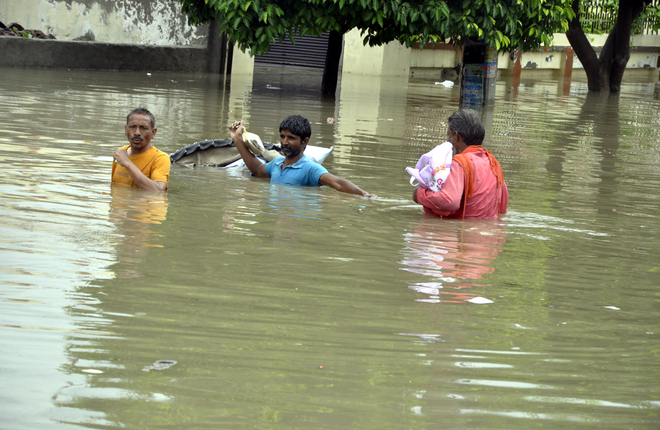 Stagnant water can be seen in posh areas like Civil Lines and near official residences in Bathinda. Tribune photo

Though dengue and malaria have started spreading tentacles in the district, stagnant rainwater can be spotted on roads, and in public places and residential areas of the city. The city witnessed rain four days ago.

Stagnant water can be seen even in posh areas, including Civil Lines, and near residences of administration and police officials as well as the district administrative complex. Low-lying areas are worst-hit.

New pipelines laid in some areas

We have installed new pipelines in some areas. Residents can raise a formal complaint with us, if there is stagnant water in their areas.

Sources in the Health Department said it was a cause for concern that even the posh areas of the city and those adjacent to the residences of the Deputy Commissioner and the Senior Superintendent of Police remained inundated. This could result in spread of vector-borne diseases, they said.

Though the health department officials claimed they had been taking steps to prevent breeding of larvae in different parts of the district, without a proper drainage system, the threat of spreading of dengue and malaria looms large.

As per the Health Department records, so far, seven cases of dengue and two cases of malaria had surfaced in the district during this season.

The ground reality belies the claim of the Bathinda Municipal Corporation that crores of rupees had been spent to maintain sewerage in the city. Even after mild rain, city residents could be seen wading through waist-deep water, said the sources.

Mayor Raman Goyal said, “We have been making efforts to drain out the rainwater from all areas in the city. We have installed new pipelines in some areas. Residents can raise a formal complaint with us, if there is stagnant water in their areas, and we will resolve it on priority.”

Jaswinder Sharma, Health and Sanitary Inspector, district Health Department, said, “The teams of the department have been spraying medicine in stagnant water in different parts of the district to avoid breeding of dengue larvae. We have been conducting regular fogging in residential areas, in coordination with the Municipal Corporation. However, draining out water does not fall in our jurisdiction.”