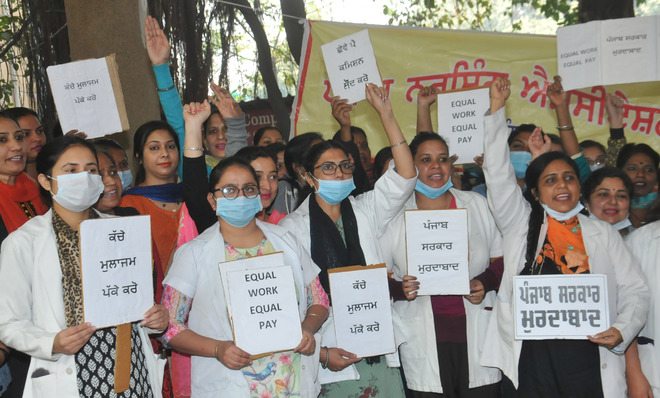 Staff nurses under the banner of the Punjab Nursing Association started an indefinite ‘pen down, tool down’ strike and sat on a dharna outside the Civil Surgeon’s office in Bathinda.

They have been demanding that the government must ensure pay parity and implement the Sixth Pay Commission recommendations as per the revised pay scale in 2011 and also increase the strength of nursing staff in state hospitals.

The govt has been turning a deaf ear to our demands. So, we have launched an indefinite ‘pen down, tool down’ strike. The protest will continue until our demands are met. Swaranjit Kaur, Bathinda Nursing Assn Chief

Swaranjit Kaur, president of the Bathinda unit, said: “The government has been turning a deaf ear to our genuine demands. So, we have launched an indefinite ‘pen down, tool down’ strike. Our protest will continue until our demands are met.”

“We have also been demanding for long that the status of nursing staff be changed to nursing officers but that also seems to have been ignored. Moreover, we also demand that nurses doing night shifts be given extra nursing care allowance considering the workload they undertake when the department is grappling with acute staff cruch.” — TNS