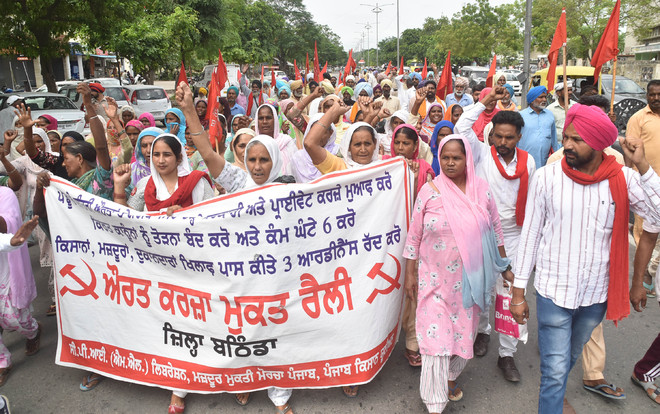 Members of the Mazdoor Mukti Morcha protest in Bathinda on Wednesday. Pawan Sharma

Hundreds of women participated in the ‘Aurat karza mukti rally’ organised under the banner of the Mazdoor Mukti Morcha in Bathinda on Wednesday.

Before taking out a protest march in the city, they held a meeting outside the Rose Garden here.

Addressing the protesters, Punjab Mazdoor Mukti Morcha state president Bhagwant Singh Samao, state secretary Harwinder Singh Sema and district president Pritpal Singh Rampura said due to the rising unemployment and inflation rates, women from rural and urban landless poor families were living in fear due to debt trap of private finance companies. They said to pay instalments of these loans, working women had to sell their valuables for pennies. They said the state government was anti-women for ignoring poor women in the debt waiver schemes. They said in order to divert attention of people, from their betrayal, the Congress had removed Captain and made Charanjit Singh Channi the Chief Minister. They said the mazdoor morcha would intensify their agitation till the fulfilment of their demands.