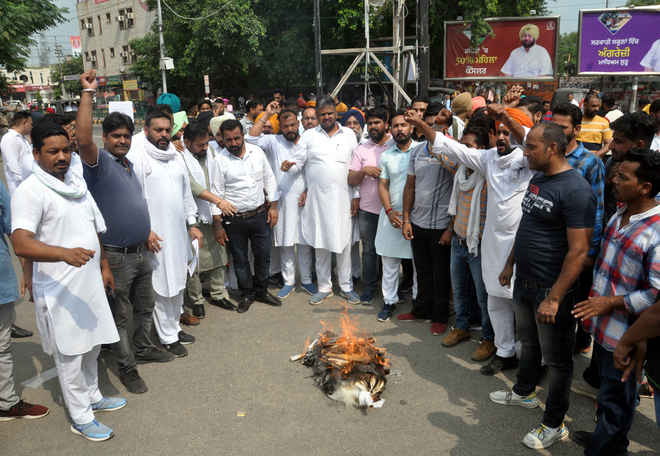 Demanding cancellation of the Cabinet decision to provide job to the son-in-law of outgoing Cabinet minister Gurpreet Kangar on compassionate grounds, Youth Akali Dal leaders and workers staged a protest and burnt his effigy here.

Gathering near the Fire Brigade Chowk here, the party workers raised slogans against the government and termed the decision as “betrayal” to thousands of unemployed youth in the state.

Harpal Singh Dhillon, president, YAD (Bathinda urban), said, “The Congress that promised ‘Ghar Ghar Rozgar’ has been reduced to merely providing jobs to kin of party leaders while well-qualified unemployed candidates seeking jobs are protesting. Staff salaries and pensions are not being paid by the government. Contractual workers rendering their services in different government departments have been protesting to seek regularisation of services but to no avail.”

Dhillon added, “The Congress government has failed to honour its pre-poll promises even as over four years have passed since it came to power in the state. Capt Amarinder Singh’s unceremonious ouster points towards the failure of the party on the governance front. People of the state now want Akali Dal-led government which will usher in development and growth of the state as the party did in its previous two consecutive terms. Once in power, the party will also reverse all wrong decisions and policies of the Congress-led government.”