They have prevented stubble burning on over 1,900 acres in adjoining villages 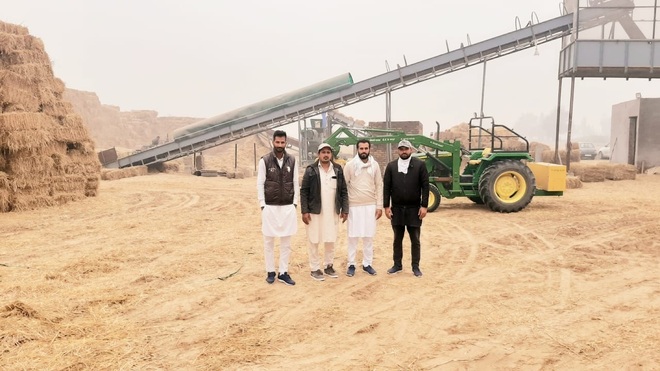 Young entrepreneurs who collect stubble and sell in neighbouring states.

While a majority of the farmers are burning paddy stubble to clear their fields, there are a few young entrepreneurs who have been making money by selling straw in neighbouring states.

Amardeep Singh, a youth of Gurusar village, along with his five companions — Karamjit Singh, Mandeep Singh, Ravneet Singh, Mandeep Singh and Yadvinder Singh — is converting paddy subble into bales and sending it to other states. The group has so far prevented stubble burning on more than 1,900 acres in his adjoining villages.

Amardeep says he, along with his colleagues, had started the project this year. "We have bought two balers through which we collect stubble from fields and make bales, weighing 20 kg each. The first machine converts stubble to loose straw and then another machine compresses the same to make straw bale. The size of a bale is only 4x2x2 ft. This way, it becomes easy to store and transport," he said.

According to Amardeep, his group sends these straw bales for use as fodder for livestock to states facing fodder shortage, mainly Rajasthan, Madhya Pradesh, Gujarat and Maharashtra.

Notably, the straw is also used as a mattress to protect animals from cold.

Amardeep Singh said he was constantly encouraging the farmers not to burn stubble, but to dispose it of in different ways. He said he didn't take money from farmers to collect straw.

Meanwhile, MK Aravind Kumar, Deputy Commissioner, Muktsar, appreciated the efforts of the entrepreneurs and said that the straw was not a problem, but a wealth if managed properly. He also appealed to other farmers to make such groups and make money from stubble.