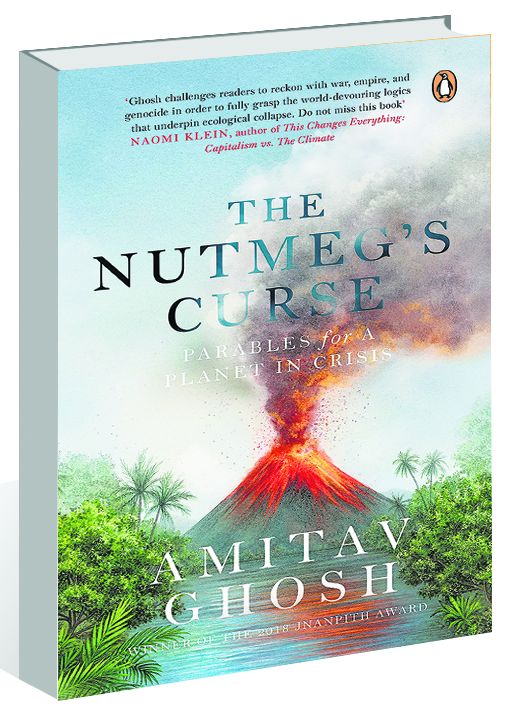 Climate change conferences, like the one at Glasgow, tend to attract a lot of attention with high-sounding calls for ‘Saving the Planet’ from the impending catastrophic effects of the rising temperature. New promises are made and pledges recorded on cutting down emissions of greenhouse gases. The goal is to move towards a stage where the amount of carbon emitted into the atmosphere equals the amount absorbed from the atmosphere. The discourse is clouded with cold numbers — timelines, emission trajectories, new technologies, carbon markets, climate finance and so on. But a key piece of this puzzle is often missing from such summits — people and communities bearing the brunt of climate change, climate migrants and refugees, poor farmers, fisherfolk, tribal people and so on. Climate change is also as much about the past as about the future. Deep inequities are ingrained in the way the world functions since the time of colonisation.

Amitav Ghosh’s new book points to such glaring gaps in our collective understanding of the climate change phenomenon. It connects the unfolding climate crisis in the 21st century with the colonisation process that unfolded in the 15th century in the Indian Ocean region, the Americas, Australia and Africa. Extensively drawing from history, documentary evidence, scientific studies, oral history, folklore and field visits, Ghosh has traced how colonisation was all about resource extraction, ecological destruction and mass uprooting of the communities that harmoniously lived with nature.

Climate change is not just a techno-economic concern but a matter of justice rooted in histories of race, class, geopolitics and capitalism. Ghosh illustrates this with the fascinating story of nutmeg, clove and mace in the islands of the Indian Ocean over the centuries, and the subsequent rise of fossil fuels like coal and oil. He writes, “Five centuries of history — going back to geopolitical rivalries over the control of cloves, nutmegs and pepper — have given the world’s most ‘advanced’ countries a strategic interest in perpetuating the global fossil fuel regime.” Fossil fuels have always been enmeshed with the lives of people in ways that tend to reinforce the power of the ruling classes. Therefore, a kilowatt of electricity produced from non-fossil sources like solar and wind should be viewed differently than that produced with coal, oil or gas. This very understanding of history should serve as a strategic incentive to rising powers like India and China to move to renewables.

Besides uncovering the historical underpinning of the climate crisis, the author argues that climate change is just one aspect of a much broader planetary crisis. “Climate change, mass dislocations, pollution, environmental degradation, political breakdown and the Covid-19 pandemic are all cognate effects of the ever-increasing acceleration of the last three decades” and they are all inter-linked, deeply rooted in history and “ultimately driven by the dynamics of global power”. For instance, the media described the European migration crisis of 2015 as a result of people coming from war-torn countries, but Ghosh found that a large number of people who migrated were from South Asia. These migrants shared their stories with him on how they had moved out as farming was affected due to weather-related disasters back home.

The climate crisis, Ghosh argues, can be addressed through some sort of ‘social epidemic’ and coming together of disparate groups and movements. This may result in an earth-centred mass movement with the emergence of broad and inclusive transcontinental alliances. In India, the solution may lie in the idea of ‘livelihood environmentalism’ espoused by Ramachandra Guha, rather than the environmentalism propagated by ‘elitist conservationists, avaricious gurus and godmen, right-wing cults and most of all, political parties’. In the West, the popularity of young activists like Greta Thunberg is not solely because of her mantra, ‘listen to the science’, but because young people are convinced that ‘extractive capitalism is on its last legs’. Therefore, the author sees it as a ray of hope.

The extensively researched book makes for compelling reading, giving new insights into different dimensions of climate change. Ghosh’s penchant for colonisation, combined with his superb storytelling craft, has resulted in a powerful narrative that effortlessly transcends centuries and disciplines. The book brilliantly connects the dots and provides a refreshing perspective on the climate crisis.