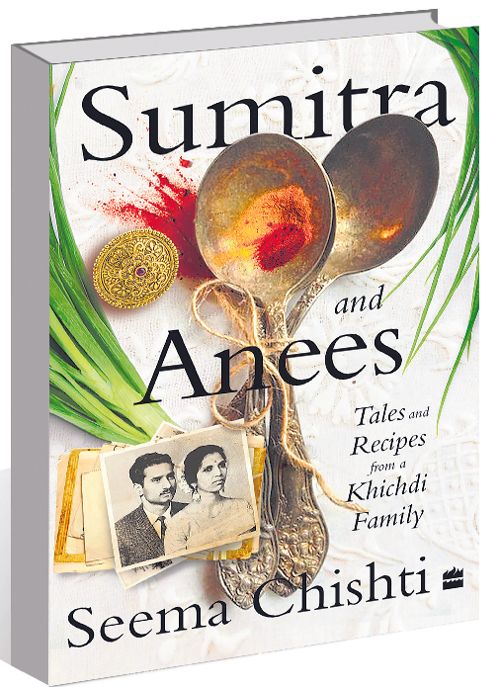 Sumitra and Anees: Tales and Recipes from a Khichdi Family by Seema Chishti. HarperCollins. Pages 200. Rs 399

THE year was 1965 and I had just joined the Indian School of International Studies at Sapru House. “It had a sprawling lush green lawn with a good library attached to it,” it would be said. Not to forget the canteen on the mezzanine floor that attracted artistes, journalists and intellectuals from all over Delhi. This is where I first encountered Anees Bhai and Sumitraji. Both were senior and, in those days, seniors were treated with respect. They weren’t married then, but were often seen together.

Anees Chishti was already a famous byline in Mainstream, the leftist periodical edited by Nikhil Chakravarty, but was disarmingly informal, encouraging youngsters and engaging in conversations. He wore his scholarship and ideology lightly. Sumitraji was more reserved, but enjoyed the reputation of a bright, meticulous economist. I recollect she was always dressed elegantly in resplendent silk saris. I think it was Shaukat Hayat Ahmed, an elderly scholar researching Sino-Soviet schism, who introduced me to Anees Bhai. A year later, the two married, as Seema recounts in her book, in a small, simple ceremony attended by a few friends. How long ago it seems!

It was indeed a different world, a different country, when a Muslim man from Deoria could marry a Hindu girl from Karnataka without sparking a communal riot. Of course, there were hardships — renting out accommodation in a predominantly Hindu residential area, but nothing that could pose a risk to life or limb. Three or four years later, when Javed Alam from Hyderabad married Jayanti Guha from Bengal (both Sapru House hostel mates in Gomati), a furore was caused and the ugly storm took some time to die down.

Many decades later, I met Seema, the couple’s daughter, who had just returned from England. Seema is brilliant in her own right, inheriting the best from both parents — fluency in many languages, an insatiable curiosity, dedication to meticulous research and an impish sense of humour. Our paths crossed repeatedly when she was at the BBC, but I never met Anees Bhai again. Sumitraji joined JNU and was a colleague after she retired from the Indian Institute of Foreign Trade, but our academic interests didn’t converge and there was little interaction. This slim volume has rekindled many old memories. Shahid Amin’s memoir of his beloved mamu, also part of the book, is sheer joy to read.

And then there are the recipes. The descriptions follow the minimalist route. They are ideal for a lazy cook who doesn’t like kitchen chores but loves good food. From different kinds of rasam, dal and kadhi to shami kebabs, mutton and chicken curries, snacks and sweets, everything to compose a simple yet elegant meal for self and guests is here. They offer plenty of scope for improvisation. Seema has generously shared not only the recipes but also anecdotes that take the reader down the nostalgic route when we not only tolerated, but celebrated diversity and, in the process, enriched our own lives. This was when Ganga-Jamuni composite culture wasn’t confined to a few cosmopolitan places — Lucknow, Delhi, Hyderabad. From Deoria in Poorvanchal to Konkan on the west coast, it was the lived experience. Can one really believe that the hordes of venomous vigilantes can be driven away by wafting aromas from the kitchen?

Vir Sanghvi’s hard-hitting ‘Afterword’ leaves no scope for naive optimism. Times have changed and for worse. Our priceless shared heritage (not only culinary) is being systematically destroyed by hooligans patronised by those in power and let loose by hate-mongers. Liberal and secular have become words of abuse. Love hyphenated with jihad is inseparable for most from an internationally hatched conspiracy of terrorists. This book is a timely reminder that to retain what we value, we must not yield but push back when threatened and be prepared for long-drawn battles.

Rijiju: Have told Collegium to rethink on judges’ appointment