Renowned Author, Sabarna Roy, is coming up with two different titles in November 2021 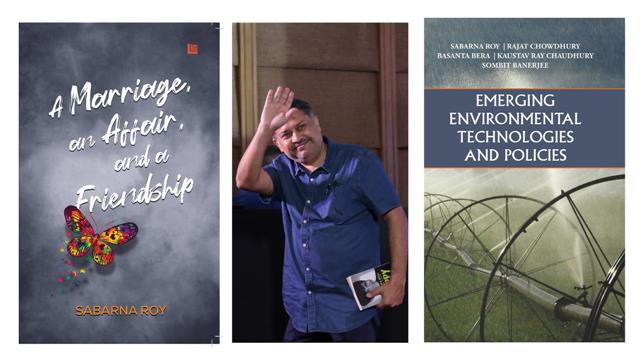 The celebrated author, Sabarna Roy, is coming up with two books in November 2021.

One is a technical book, his third along with his co-authors, and the other is a literary work, his eighth literary work.

The literary work is titled: A Marriage, an Affair, and a Friendship.

This is a story where Rahul, Paromita, Suroma and Samaresh bisect and intersect boundaries of marriage, affair, and friendship, evolving into an intriguing cocktail and mix of human relationship.

Sabarna Roy looks at a marriage, an affair, and a friendship in a very in-teresting, and a fast-paced prose and gravitates to the idea of an open marriage in a modernist setting. It is a highly enjoyable read that strikes at our prejudices and regressive thoughts in a subtle and fleeting manner. A must read. True to his style, Sabarna experiments within the format of prose writing inside a single piece of novella. A starkly visual human drama!

The technical book is titled: Emerging Environmental Technologies and Policies.

Emerging Environmental Technologies and Policies deals with five intriguing subjects: Comparison between conventional sewer system by way of gravity sewer collection, pressurized piped sewerage transmission and vacuum piped sewerage transmission; water and circular economy; continuous 24x7 smart water supply projects; comparative study on ZLD and MLD for wastewater management, and irrigation efficiencies for canal-based system and pipeline system. This is a practicing manual for the critical thinkers in the field of environment dealing with water, wastewater, and irrigation. The authors while dealing with such complex topics have balanced the language with lucidity, diagrams, and flow charts to make the subject even comprehensible and interesting to a lay reader.

Sabarna Roy has two technical books to his name, titled: (i) Articles on Ductile Iron Pipelines and Framework Agreement Methodology, and (ii) Technological Trends in Water Sector for a Sustainable Solution.

Sabarna started keeping diaries and journaling since the age of fourteen. It was as if a ritual with him. He wrote about everyday events; what happened at school; the films he watched; the books he read; the delicacies that he ate; the cricket matches that he played; conversations with his parents, school teachers, and friends; the places that he travelled with his parents; his moments of sadness, boredom, and elation, and so many other things. These diaries and journals over the years inflated like novels – as if written in a stream of consciousness. His first published book was an anthology of twenty English poems published in 1986 with a gift of rupees two hundred from his mother that sold in Jadavpur University, Presidency College and St. Xavier's College like hot cake in Calcutta. After he joined the Corporate sector, he wrote on and off in Bengali and English and published some of his poems in renowned literary journals in Calcutta. In 1994, he wrote a play in Bengali, titled: Ajante, which was later published in the annual journal of Bohurupee in 2010. Between 2002 and 2005, Sabarna became an oral storyteller among his friends, colleagues, and relatives, a habit which he started with a lot of passion but gradually waned with time. In 2007, he started writing seriously for pursuing his second profession apart from being a senior engineering professional. His first book Pentacles was published in 2010. Thereafter, he continued producing books-after-books both in the literary format as well as in the technological format.

Sabarna has been awarded the Literoma Laureate Award in 2019, Literoma Star Achiever Award 2020, Random Subterranean Mosaic: 2012 – 2018 won the best book of the year 2019, the A List Award for excellence in fiction by the NewsX Media House, Certificate for The Real Super Heroes for spreading a spirit of positivity and hope during the COVID-19 Pandemic from Forever Star India Award 2020, and the Certificate for Participation in the Indo Russian Friendship Celebration 2020, the Literoma Golden Star Award 2020: Lifetime Achievement, and the Certificate of Appreciation for featuring in the Hall of Fame of Literoma International Symposium on Literature & Festival 2020, and the Times Eminent Writer of the Year award by The Times of India Group in Kolkata in February 2021.

Sabarna is one of the winners of the Champions of Change 2020 Award given out by Interactive Forum on Indian Economy supported by Government of India.

Sabarna is one of the recipients of Economic Times News Makers 2021 (Eastern Region), Top 10 Most Influential Business Leaders of 2021 given out by Business World and ANI in association with the Indian Alert and Times Excellence Award 2021 in Indian Literature given out by the Times Group.