Is 2022 the year for Metaverse? Explains Arpit Sharma 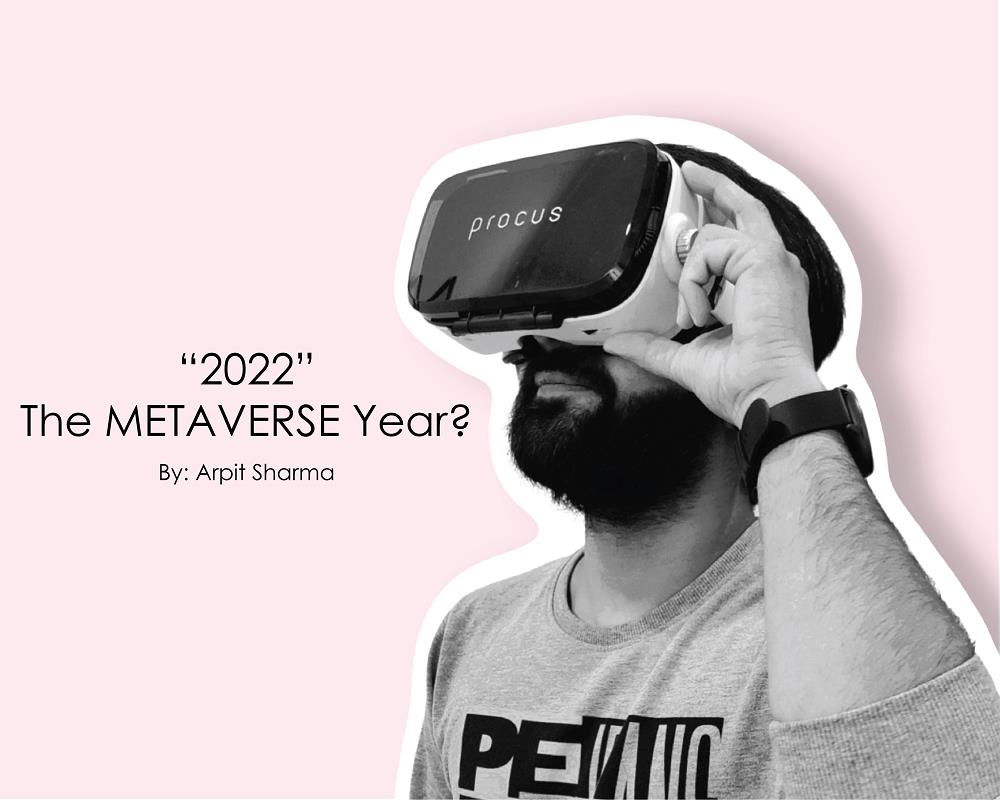 The past year was a very eventful one, especially for the digital world. Global internet shut down twice, YouTube algorithms changed, Facebook changed its parent company's name were some of the more notable newsmakers. However, one news left more than a mark amongst all these.

The renaming of Facebook to 'Meta' was just the first step towards a digital future. A future where people will be able to live their lives inside the digital world. A future where anything and everything can be made possible. But would the coming year bring any significant changes for this industry?

Metaverse refers to the digital world that allows people to interact with objects and colleagues. It is like a virtual reality Sims game, with many capabilities such as inbuilt voice and meeting controls, emails, etc.

However, unlike standard online games, Metaverse requires the backing of high-tech pieces of equipment to be appropriately utilized. The sudden AR and VR tech jump can be attributed to the race that started into the first-ever Metaverse deployment.

Facebook recently changed its name to 'Meta' and announced its plans to enter the virtual space. Soon after, Microsoft and Amazon also aired their thoughts on this matter. Any company that initiates the deployment of the Metaverse first will obviously gain an immense following.

However, the second company will have more time to research and learn from its predecessor's mistakes to deliver better products. So, the race to provide the best meta experience is on. And currently, we are in the first big step.

The deployment is divided into many steps- creating required tech, combining software and hardware, and finally, some fine-tuning. We are lucky to witness the first step come to pass. With the declaration made by these tech giants, the race to create the best piece of technology has restarted with vigor.

This is one of the most integral aspects of Metaverse. To fully deploy the Metaverse, you need gear that allows people to immerse themselves into a virtual reality completely. The Oculus and Google Cardboard iterations of this product have come a long way from their first offer. But it still has left a lot of us wanting more.

Just like the real world runs on money, the virtual world will need to run on some sort of economy as well. Blockchain has emerged as the frontrunner in deploying financial services for businesses in the Metaverse. Still, the transition of traditional business houses is a hurdle that will be difficult to cross.

Just like how there are positives to any decision, there are negatives as well. So while the increased flow of ideas and information is a good thing, it has also brought up a few problems that brands would try and answer in the coming months.

This is the biggest concern by far. We already struggle with privacy, thanks to how snoopy the social media platforms are. Creating a platform that will allow you to live a second life, completely digital, is the surest way of disclosing all your confidential data to these tech combinations.

While the brands have assured that there will be a minimum requirement of data, it remains to be seen how they plan to implement all this.

Since the Metaverse will have financial transactions, the safety and validity of these transactions is a natural estimation of that. But with the increased advances made in Blockchain, the brands are looking to suppress our questions once and for all.

Observing technology profoundly since 2012, Arpit Sharma (A Multi-domain Entrepreneur) believes that the coming years will be crucial to the deployment of Metaverse, not in terms of actual products, but in terms of laying the foundation and gauging the public response and opinion.

Meta, formerly Facebook, has the most significant lead on its rivals. This is because it has been manufacturing and selling VR hardware for quite some time now. In fact, it accounts for more than 75% of all the hardware sold (VR).

The Quest 2 headset, in addition to the Oculus app, made VR a reality, although not completely, but enough to leave jaws hanging. Furthermore, it is also planning on releasing another VR headset this year, titled Project Cambria.

While Apple hasn't explicitly stated anything about its VR tech, it has been in the works for quite some time now. And if reliable sources are to be believed, we could see a high-end Apple headset that could be launched in 2022 itself. And since Apple is keeping everything under wraps, it expects to redefine the Metaverse with products, just like how the original iPhone redefined the smartphone genre.

Google started the VR craze way back in 2013 when it launched the Google Glass. Since then, newer and better versions have gone above and beyond the crowd's expectations. After having bought North, Google is now hiring heavily to increase the functionality of Google Glass. In addition, it is now planning on creating innovative AR products in the coming years.

The launch of HoloLens marked the beginning of the production of fully-featured AR headsets. In fact, it is so effective that the US military requested Microsoft for 120,000 customized HoloLens. In addition, Microsoft is trying to integrate Mesh into Teams (its video conferencing app). These Metaverse features are slated to be launched in 2022, alongside its robust cloud systems, to sustain the Metaverse.

The big tech brands have geared up and are trying to outdo each other. The competition is fierce, and the features offered are beyond futuristic. While it is not known which company will win the Metaverse race, one thing is for sure; the customers will always win, no matter who comes out on top.